Obstacle Course Racers Go for the Thrill, the Punishment and the Mud

A cold drizzle fell on Caleb Vallencourt as he hustled through the mud carrying 80 pounds of cement. Jessica Hopper splashed through a puddle and edged past him — hugging her own 50-pound bucket of cement.

They also hurled themselves over a 20-foot wall, shimmied 18 feet up a thick rope, jogged wearing a 40-pound shoulder yoke and flipped tractor tires in the muck — all for fun.

The two friends and fellow athletes, both 38, are avid obstacle course racers who took time out from a recent practice session in South Burlington to explain why they enter competitions inspired by an ancient warrior society.

With names like Spartan, Savage, Tough Mudder, Bog Commander and American Ninja Warrior, obstacle course races have attracted millions of people to a sport that encourages competitors to find their "inner warrior" — and maybe throw a few spears in the process.

The racers also suffer. And then stop suffering, and that's part of the thrill, explained Vallencourt. A personal trainer at the Edge Sports & Fitness in South Burlington, he not only races but coaches would-be Spartans on an obstacle course training ground at the club's Twin Oaks Terrace location.

Vallencourt has been racing for eight years and said he still feels the rush. During a recent competition, he completed the cement "bucket carry" section, put down the bucket and felt a surge of happiness as he resumed running without the burden. "I was almost springing," Vallencourt said. He remembers thinking, This is amazing. I feel wonderful.

Hopper, who met Vallencourt when he began training obstacle course racers at the Edge four years ago and competed in her first race six years ago, is hooked on the sport. And she feels a similar euphoria when she competes. Although she's plagued with nerves before a race, Hopper said, once she's running sandbags up a mountain or cradling an Atlas ball, she becomes completely engrossed and determined to finish.

Crossing the line is "the best feeling,'' said Hopper, an inventory analyst at Keurig Dr Pepper in Williston. "No matter how well you did, it makes you want to keep training and do it again. I haven't met many people who do one race and don't want to do it again.''

Hopper does not look like a warrior. She's five feet, five inches tall, weighs 128 pounds and, apart from relatively broad shoulders, would not register as killer-strong at first glance. Yet she is. That became clear as she scrambled over walls and sprinted through a tire obstacle course during a recent practice session at the Edge.

Vallencourt has broad shoulders and bulging calves, but he does not resemble a muscle-bound hulk, either. At five feet, 10 inches, he weighs "about 195" pounds — and expects to drop at least 10 pounds as competition season ramps up.

Obstacle races vary in length and format. They range from a 5.6-mile "sprint" with 20 obstacles to a 16-mile "beast" with 35 obstacles to even longer ordeals. One of the most popular race series, the Spartan, grew out of the Death Race, first held about 15 years ago on the Pittsfield farm of Joe De Sena.

The Spartan is now a major global race series with a website that offers tips on diet, training and mental strength. "When you leave a Spartan race you're not going to complain about little things in life because, compared to the challenges you've faced, they're nothing," the website states. "When the elevator goes out at work, you won't mind because you're already taking the stairs."

De Sena, the CEO of Spartan, still lives in Pittsfield and has become an obstacle race guru with best-selling books, including The Spartan Way. He also maintains a blog in which he writes about "ripping people off the couch" and explains why humans work harder "when we feel others are watching our every move."

The obstacle race world is not without competition of another sort: the race for money. It has spawned oodles of merchandise, TV broadcasts, training camps and high-profile championships. In 2016, De Sena settled a lawsuit with his Death Race cofounder after a dispute involving profits from the Spartan spin-off.

None of the controversy has deterred competitors up for an extreme challenge. 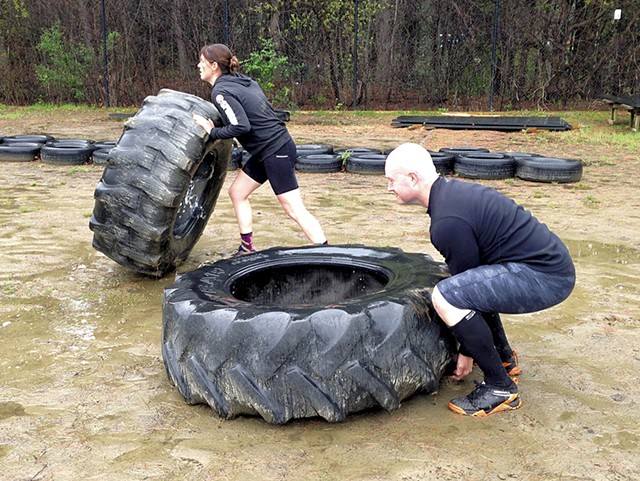 Of course, not everyone who is "ripped" off the couch can be good at obstacle course racing. But Hopper and Vallencourt discovered that they are. They often finish near the top at races in Vermont and neighboring states. Last year, Hopper took second in her division (ages 30-39) at the North American Obstacle Course Racing Championships in Stratton.

"Her nickname's 'The Mountain.' She's a hiker and she smokes everybody," Vallencourt said of Hopper.

But uphill endurance isn't the only talent required. With spear throwing, monkey-bar swinging and various grab-and-hang obstacles, success lies in the hands, as well. "You have to have excellent grip strength or you're screwed," Vallencourt noted. His secret to success: "I'm a runner, and I've got really good grip strength."

Vallencourt ran cross-country in high school and at the University of Rhode Island. He's been a personal trainer for 16 years. Many of his clients are friends who appreciate his blunt charm. "We have so much fun,'' he said. Some clients are recovering from injuries, some are training for various competitions, and others "just want to look good naked," he quipped.

They all get the same tough love. "I'll just be straight-up mean to people if I want to. It's so much fun," said Vallencourt, not sounding very mean at all. He chortled as he imitated himself chiding clients: "Suck it up. My God, you're embarrassing me.''

Vallencourt began obstacle racing shortly after his father died in 2011. He sobbed in grief through part of that first race at the Killington Ski Resort but still finished at the front of the pack. "I was like, I'm still here, I'm still alive and I can do this," he said.

For her part, Hopper grew up hiking, skiing and playing soccer in South Wheelock, near Lyndonville. She now lives with her husband and their two Labs in St. Albans. She sometimes drives to Mt. Mansfield before work and manages to get all the way up and down Vermont's tallest peak in one hour.

With obstacle racing, she likes the mix of strength, agility and cardio; even the "penalties" built into races don't seem that bad to her, Hopper said. In many races, contestants who miss the target with their spear or drop off the monkey-bar-like "rigs" before swinging all the way across must do a certain number of burpees — an obnoxious cross between a jumping jack and push-up — to make up for their deficiencies. Burpees slow people down and make it harder to win, but sometimes competitors gather to cheer on fellow athletes through their burpee penalties — a show of camaraderie that Hopper called "heartening."

It's also fun to compete in a sport "where women and men can be pretty equally matched," Hopper added, noting that the women's Spartan world champion, Lindsay Webster, "beats almost all the men."

Sometimes Vallencourt and Hopper compete individually, and sometimes they form a team. She usually goes uphill faster than he does, but he goes faster on the way down, he said. They veer from encouragement to efforts to out-run, out-lift and out-climb one another. And the training partners will try to keep track of each other on courses that can attract more than 1,000 competitors.

"It's good to know where the other one is, so we can try to pick each other off," said Vallencourt. He has claimed several top-10 finishes in the Vermont Spartan Sprint and placed 35th out of 4,900 competitors at the 2017 Boston Spartan Sprint.

Summer is their big training season. Vallencourt ups his lifting, running and time spent on the obstacle course at the Edge — an area that used to be two outdoor tennis courts. He drops 20 pounds without really trying. "As the season goes along, you tend to shed any body fat that you have," he said. "You're running a lot, you're lifting, your diet is locked in around races, you aren't drinking as much, and you aren't eating as much shitty food," he explained.

Vallencourt will typically do six to eight races from spring to fall, spaced out "so my wife doesn't kill me," he said. The Colchester resident also has entered both of his children, ages 8 and 5, in Spartan kiddie races.

One of the big races on the calendar this year for both Hopper and Vallencourt is the North American Obstacle Racing Championships at Stratton Mountain in August.

"Technique, endurance and determination" are among the most important qualities for an obstacle racer, Hopper said. She's learned that first hand, after successfully pushing herself to the finish line coated in mud, gasping for breath and dizzy from burpees. Her inner warrior goes by this mantra: "I'm not giving up."

The original print version of this article was headlined "Summer Feats | Obstacle course racers go for the thrill, the punishment and the mud"