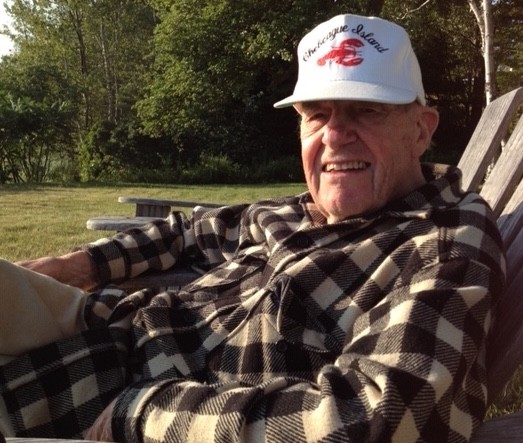 Our dad, a member of the Greatest Generation, climbed one more time into the cockpit of a B-17 and departed the surly bonds of Earth for his final mission Thursday, February 27, 2020. Daughter Gail, son Bradford and son-in-law Chris were there to see him on his way…. off to the heavens.

At the young age of 20, Bill enlisted in the Army Air Force. With the rank of first lieutenant, Eighth Air Force, he earned the right to the copilot seat in a new B-17 Flying Fortress headed to Europe to assist the Allies in defeating Adolf Hitler.

Stationed in Knettishall, England, Dad’s initial commitment was to fly 25 bombing missions. He volunteered for 10 additional missions. Returning from his 35th and final bombing run on Christmas Eve 1944, Dad’s B-17 was badly damaged by enemy flack, injuring his captain, the pilot. Three of the aircraft’s four engines had been hit and failed. Dad took control of the plane, crash-landing in a field in Belgium. All were rescued by Allied Forces. All survived. 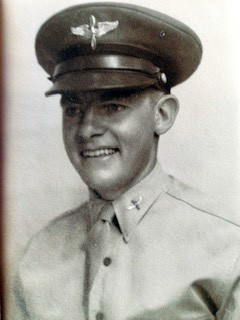 Bill and his wife, Rae, traveled annually to the Mighty 388th Bomb Group reunions held around the United States and England to reminisce and rejoice with lifelong B-17 veterans and their families.

Perhaps one of Dad’s most famous missions was not a bombing run at all but a highly top-secret flight. His crew was selected to escort Joseph P. Kennedy Jr. on what was an ill-fated attempt to deliver a lethal blow to the enemy. Dad’s crew was to provide escort coverage for Kennedy. Positioned 500 feet off the right wing of Kennedy’s plane when it blew up, Dad’s B-17 became inverted due to the violent explosion. He and his pilot had all they could do to control their Flying Fortress.

Soon after the war, Dad was in Hyannis, Mass., for a weekend getaway. John and Bobby Kennedy heard Dad was nearby and met up with him on the beach near the Kennedy Compound, thanking Dad for his bravery and wanting to learn more about the fate of their oldest brother.

William W. Worthen was born in Springfield, Mass., on December 20, 1922, the son of Ernest N. and Emma L. (Merrill) Worthen. His mother nicknamed him Birdie, as he was always happily singing and whistling — a quality he shared throughout his life.

Bill spent his younger years traveling to the family farm in Worthington, Mass., as well as summers on Chebeague Island, Maine. The family cottage on Chebeague was one of his favorite places to be. Dad was a highly proficient gardener growing an amazing variety of vegetables, and he could dig a bushel of clams as fast as any native islander.

Dad was always comfortable in the kitchen cooking and baking, a confidence inherited by Gail and Brad.

Bill was a natural outdoorsman. He spent summers in his formative years exploring wildlife on the family farm and traveled by train to the Rangeley Lake Region of Maine for boys' camp. He attended Williston Academy and graduated in 1950 from the UVM College of Agriculture. Dad enjoyed immensely his lifelong friendship with his Delta Psi fraternity brother, hunting buddy and best man John Kubin and his wife, Sally.

Dad was a graceful fly fisherman casting the headwaters of the Lamoille River. He canoed regularly on the Winooski River and Waterbury Reservoir, often during hunting season looking for the unsuspecting buck stopping by water's edge.

At UVM, Dad was a member of the Varsity Nordic Ski Team, specializing in ski jumping. Dad continued to ski his entire life. Whether it was skinning up Camel's Hump midwinter or teleskiing Stowe’s Front Four, Dad always enjoyed the Vermont winters. He took his final runs at the age of 90.

Bill was predeceased by his loving and devoted wife of 65 years, Rae M. Worthen; his parents, Ernest and Emma; his siblings Merrill, Katherine and Judith; and his niece Judith Maud.

Dad resided the past 2.5 years at Gazebo North Assisted Living in South Burlington. His apartment looked back at Elsom Parkway, where he and Rae lived for 63 years. Gail and Bradford praise the incredible team at the Gazebo. They all loved Dad, and he loved them, too. The care he received was beyond expectations, right to Dad’s final moments. In addition, he had excellent care and guidance provided by Drs. Jennifer Gilwee and Zail Berry, as well as the Visiting Nurse Association. Thank you all from the bottom of our hearts.

A celebration of Bill’s life will be held Saturday, May 16, 2020, 11 a.m., at the Riverview Cemetery in Richmond, Vt. Arrangements by Gifford Funeral Services of Richmond, Vt., with condolences at giffordfuneralhome.com.