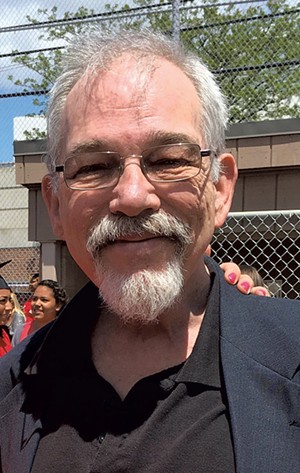 Essex, Vt., resident Bill Moffett died peacefully at the age of 72 on Saturday, February 13, 2021, at the McClure Miller Respite House in Colchester, Vt., with family at his side.

Bill was born in Beverly, Mass., on January 15, 1949, to Len and Jean Moffett. Bill is survived by his children, Derek Moffett and his partner, Patrick Beeson, of Montpelier; Natalie Moffett of Saugus, Mass.; Christine and her husband, Bill Festa, of Saugus, Mass.; and Lisa Greeley of Malden, Mass. He also was the proud grandfather of Emily and William Festa and Courtney Twist. He is the beloved brother of Sue Killam and her husband, Don; Judy Porreca and her husband, Bill; Bobby Moffett and his wife, Elaine; Peter Moffett and his wife, Lynn; and his sister in-law, Dianne Moffett. He is also survived by many nieces and nephews. He also treasured his lifelong friendship with Stephen Palm of Saratoga Springs, N.Y., and his children Eric and Nate Palm, and Nate's fiancée, Joy Holloway.

You could often find Bill, a musician and Grateful Dead extraordinaire, at a concert, dancing and enjoying the music, telling you about a past concert, or trying to convince you to go to a future concert with him. Bill’s love of his children knew no bounds. He treasured every moment he spent with them. He taught his kids to play baseball and softball. He loved umpiring in the Essex Little League and coaching or assistant coaching on his son's and daughters' teams. He loved playing guitar and having jam sessions with Derek. Summers at Fenway Park with Natalie cheering on the Red Sox were also a favorite for him. He was so proud to take his grandson to three Dead & Company shows.

Bill also loved the arts in general, traveling and learning about different cultures. In the last year of his life, he developed an affinity for painting watercolors and sketching. He was also quite the photographer earlier in his life. His favorite part of being in the Air Force was being stationed in Okinawa, Japan. He was able to visit Japan later in life on business trips with IBM/Novellus. He also enjoyed his travels to Paris and the Netherlands.

He lived his life by the motto “Be kind” and would ask everyone to take a moment and remember to be kind to one another!

A celebration of life will be held this summer, once COVID-19 restrictions lift. In lieu of flowers, please make donations to either the McClure Miller Respite House in Colchester, Vt., or the Vermont Foodbank.