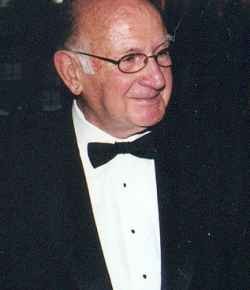 Col. Cioffi was educated at St. Mary’s Catholic School in St. Albans and St. Michael’s College in Winooski, VT. During his senior year at St. Michael’s College he was ordered to active duty with the Vermont National Guard later earning his undergraduate degree through the University of Maryland.

In 1952 Col. Cioffi was a recognized as a distinguished military graduate of the Infantry Officer’s Candidate College in Indiantown Gap, PA. He attended Chemical, Biological, and Radioactive Warfare School, the Army Finance and Administrative School, the Infantry Officer’s Advance Course, Nuclear Weapons Deployment School and the Command General Staff College. Col. Cioffi was a paratrooper and nuclear weapons officer.

His military service included tours in Europe, Korea, Vietnam, and other areas of Indo-China, as well as the United States. While serving in Korea he commanded a heavy weapons and a heavy mortar company. On returning to the U.S. he served as Commandant of the First United States Army Non Commissioned Officer Academy. He served at every staff level from battalion to joint. During his service in Vietnam he was assigned to the J-1 MACV staff and on a temporary duty assignment as a member of the SEATO planning group. Upon completion of his studies at the Command and General Staff College, Col. Cioffi was assigned to the Combat Development Command, TRADOC-CDC. His military service ended with his retirement from the regular Army in August 1972. Col. Cioffi’s military decorations included the Legion of Merit, the Bronze Star, the Army Commendation Medal with three Clusters – the Enlisted Gold Conduct Medal, the Gallantry Cross (RVN) and the Staff Service Honor Medal, and several company area medals. Additionally he received the Vermont Distinguished Veteran Medal.

After his retirement from the military Cioffi returned to Saint Albans where he was first an associate with the SS Watson Insurance and Real Estate Company then later the co-owner of the real estate department. In 1979 he became the Planning and Zoning Administrator and Assistant City Manager for the City of Saint Albans, and then in 1984 he became City Manager. It was in this capacity that Cioffi began a long-range project of renovating the Saint Albans City infrastructure. This included the rebuilding of the wastewater facility at the NW Correctional Center and the City’s main wastewater plant; programs for repaving the City’s roads and sidewalks; development of parking lots; relocation of the Police and Fire departments; the establishment of a centralized dispatch system; the purchases and developments of the Wirthmore Industrial Park and Coote Field Business Park; and the reconstruction of the Maquam Shore and Fairfax water facilities.

During his life Cioffi was always involved in youth activities. While serving in Hawaii he managed and coached an AAU swim team, but it was his love of baseball that pushed his involvement in Little League and Babe Ruth throughout much of his life. He coached and managed teams and leagues in Hawaii, Illinois, Kansas, Virginia, and Vermont. In Virginia he was also involved with the Boy Scouts of America serving as a scoutmaster, counselor, and committee member.

Col. Cioffi was an avid fan of the Boston Red Sox, Washington Redskins, and Boston Celtics. He enjoyed college basketball and in his later years was a regular at UVM Men’s basketball games always sitting side court and traveling to away games when possible. He and his sons attended a number of NCAA tournaments and of course the 2004 and 2007 World Series to see the Red Sox win.

Col. Cioffi was the recipient of many acknowledgements for his civic involvement. A section of the Franklin County District Court was dedicated in his name by Governor Madeline Kunin, the City of Saint Albans named the Maquam Shore Water Treatment Facility after him, the Saint Albans Chamber of Commerce cited him several times for his involvement in youth activities, and he was awarded the Oscar Baker Award by the NW Regional Planning Board. In 1994 Col. Cioffi was named “Mr. Baseball” by the Saint Albans Little League and in 2009 the Saint Albans Little League Complex was named the “William G. Cioffi Field” in his honor. Col. Cioffi was also the recipient of the Rotary Man of the Year, the Franklin County Industrial Development Corporation honored him as their Man of the Year, and he was presented the Vermont League of Cities and Towns’ Outstanding Service Awards. Additionally Senator Patrick Leahy and Governor James Douglas acknowledged Col. Cioffi as an Outstanding Vermonter.

A Mass celebrating his life will be held at St. Mary’s Catholic Church, 45 Fairfield Street, St. Albans on Saturday September 10, 2016 at 12pm.