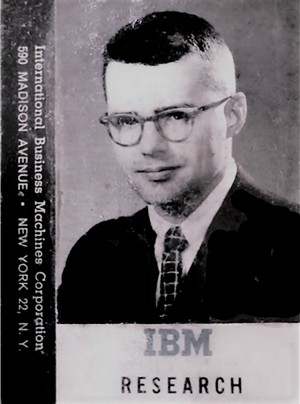 William Boone Pennebaker Jr., one of the vanguard of researchers who developed the videoconferencing technology that has kept the world connected throughout the pandemic, passed away peacefully on September 8, 2021, at home and surrounded by loving family.

Born on October 23, 1935, Bill, as he was known to his friends, earned his bachelor’s in engineering at Lehigh University in 1957, where he was a member of the Delta Chi fraternity, and his doctorate in physics at Rutgers University in 1962. Bill spent his entire career at the IBM Thomas J. Watson Research Center in Yorktown Heights, N.Y., where he was a leading developer of the JPEG and MPEG compression algorithms and contributed to ink jet, fax and videoconferencing research, filing over 35 patents and publishing over 50 papers.

During IBM Ski Club weekends at Mad River Glen, Bill met and fell in love with his future wife, Margaret. After their marriage in 1967, Bill and Margaret had two daughters. An expert woodworker, Bill spent his weekends restoring a mid-1800s-era farmhouse, doing all the finish carpentry himself and creating custom toys for his daughters, including a dollhouse with working electricity and plumbing. He also “tinkered” (as he called it) with electric bikes, and in 1980 he filed one of the earliest e-bike patents. In 1993, Bill and Margaret fulfilled their dream of retiring to Vermont, where Bill was elected to two terms on the Shaftsbury Selectboard. In his well-equipped basement workshop, Bill designed circuit boards for an advanced generation of DIY e-bikes and crafted miniature furniture so exquisite that it was featured in a special exhibit at the Bennington Museum.

In 2015, Bill was diagnosed with progressive supranuclear palsy, a rare neurodegenerative disease that slowly robbed him of nearly everything except the personal integrity and soft-spoken kindness that made him respected and beloved by all who met him.

Bill was predeceased by his wife, Margaret; his sister Sallie; and his nephew Jeff. He is survived by his daughter Patricia Pennebaker Rutins, Patricia’s husband Erik and their son (Bill’s grandson) Aleksandrs; his nephew John and his nieces Deborah and Susanna and their children and grandchildren; and his final “nuclear family,” his daughter Elizabeth Allen-Pennebaker, Elizabeth’s husband Andrew and Andrew’s mother, Leslie.

A celebration of Bill’s life will be held in the summer of 2022 in Shaftsbury. In lieu of flowers, please consider a donation to the United Negro College Fund.