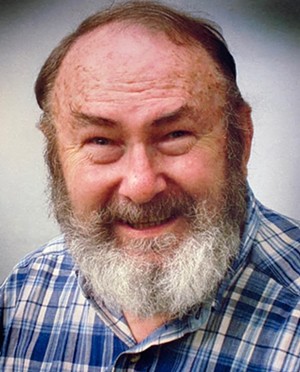 A resident of Williston since 2002, Martens was born in South Bend, Ind., in 1935, the second of four children. His parents, Erwin Martens and Bertha Marcuson Martens, led the family on a series of moves around the country — Wayne’s childhood favorite was Charlotte, N.C. — before finally settling in Detroit, Mich.

While attending Redford High School, from which he graduated in 1953, Martens discovered what would become a lifelong passion for photography. Besides working for the school yearbook, he served as a stock photographer for UPI. For a few years he attended classes at Wayne State University and Alma College — where he discovered his other lifelong passion, theater (not to mention an alma mater he would play on the piano for decades).

From there, Martens embarked on a theatrical career. He produced, directed, acted and operated theaters in San Francisco, Detroit and New York. In 1966 and '67, he starred as Bellamy in the official national touring company of The Fantasticks.

In 1968, a chance meeting changed the course of Martens’ life. Then a divorcé and single parent, raising a cognitively challenged young daughter and living in Brooklyn, he met dancer Lynne Walsh at a show in which they were both performing in the Catskills. Three years later, they married and had their first child. Two more would follow.

Needing to amplify the young family’s income, Martens set acting aside and returned to photography. In 1972 he launched, with Lynne’s help, a custom black-and-white lab out of their Park Slope apartment, dubbing it Box One to avoid alerting authorities to the zoning violation.

Quickly developing a strong reputation among professional photographers, the business soon outgrew the apartment. In 1979, it took occupation of expansive quarters in midtown Manhattan, where it remained for nearly 20 years. During this time, Martens returned to off-Broadway theater for a stint as creative director of the Harold Clurman Theatre, where he directed a well-received production of James Joyce’s Ulysses in Nighttown.

After winding down Box One’s operations, he spent a couple of years writing and self-publishing From the Top, a conversational memoir of his life up to that point.

Upon becoming a grandfather in 2002, Martens left New York City for the last time, moving to Williston, Vt., to be closer to, and provide help for, his daughter’s new family. There he returned once again, with gusto, to his love for theater, acting in numerous productions (including The Fantasticks, for which he revived his role as Bellamy in 2003) and realizing, in 2005, his long-held dream of starring as Willy Loman in a production, which he also directed, of Death of a Salesman.

Above all, Martens was devoted — in his fiercely idiosyncratic, often entertaining, sometimes exasperating, but always deeply loving way — to his family. Predeceased by his first daughter Michelle, his sister Margaret and his brother Randall, he is survived by, among others, his brother Les; his wife, Lynne; his children, Matthew, Shannon Lashua and Christopher; and his two grandchildren, Jami and Emma Lashua.