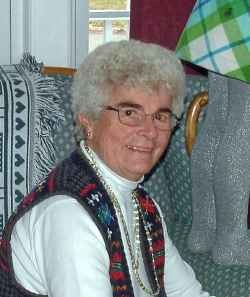 Ginny was charge nurse on the medical-surgical floor at Northwestern Medical Center before retiring in 2002 and then volunteered at the hospital after her retirement where she served on the Incorporators Board. She also enjoyed volunteering at the St. Albans Historical Society and was a longtime member of St. Paul’s United Methodist Church where she participated in the Faith and Hope Circle.

She loved many people, her immediate and extended family, fellow volunteers, class mates, coworkers and dozen others. She particularly enjoyed watching youth and high school sports.

Her family thanks the staff at St. Albans Healthcare and Rehab for their compassion and excellent care.

There are lots of deserving organizations in Franklin County that solicit donations. In lieu of flowers, the family would prefer memorial contributions in her name be given to whichever organization the giver chooses.

Messages of condolence may be sent to www.healdfuneralhome.com