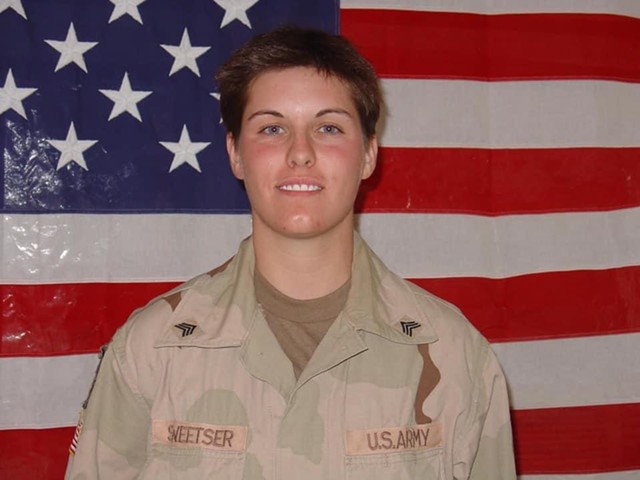 On December 11, 2020, heaven gained an angel when our beautiful Ginny lost her battle with PTSD.

Virginia L. Sweetser was born in Berlin, Vt., in 1981 to Susan and Gene Sweetser and was raised in Worcester and Essex, Vt. She was a 1999 graduate of Essex High School and the National Sports Academy in Lake Placid, N.Y., where she was the fiercest of hockey players, skating every day in the Herb Brooks Olympic Arena. She served as a legislative page in the Vermont legislature and was invited to attend Girls’ State. She attended the University of Vermont and Saint Michael’s College before transferring to University of Missouri-Kansas City, where she received her BA and then her master’s degree in social work. She was also a graduate of the Police Academy. 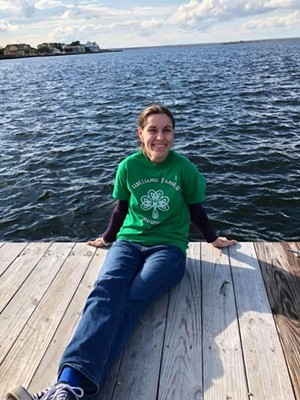 As a licensed clinical social worker in Missouri and Kansas, she worked with sexual assault victims and children. She was a mentor and counselor to many. She volunteered thousands of hours at the Metropolitan Organization to Counter Sexual Assault while in college and then joined them professionally as a counselor and therapist after earning her degree. She also taught MSW students at UMKC. Virginia specialized in sand tray therapy and wrote her master’s thesis on it. She made a difference in the lives of countless people.

Ginny was also a veteran of Operation Iraqi Freedom, having served with the 443 rd Transportation Co., Fort Riley, and deployed to Iraq, stationed in Tikrit at FOB Speicher. Sgt. Ginny, as she was known (or “Sweets”), drove the HETs for the Army and traveled in or led many convoys in Iraq during the early phase of OIF, from 2003 to 2005. She witnessed war, and it rarely left her. She was later a member of the Vermont Army National Guard Headquarters 1/86 th FA. Virginia was a friend to many, a fighter for those without a voice and an advocate for those who needed someone to have their back. She stood up for her beliefs and helped those who did not have the strength to stand. 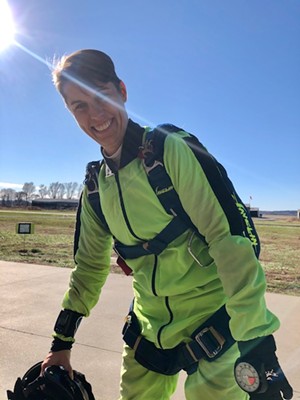 As a hobby, Ginny built many dollhouses, most of which she donated to needy children. She loved her Jeep and her off-roading friends. She had recently taken up skydiving and found serenity in that. And she was continuing the Vermont Sweetser family tradition as a basket- making apprentice with her dad. She was a world traveler, having visited many global locations with her family and her friends. She skied on the Smugglers’ Notch Racing Team and then became a snowboarder. She loved to dance and hike and was an accomplished equestrian and tennis player.

She loved her family and friends beyond words. She was selfless and always put everyone’s needs before her own. She helped her Pop-Pop when he battled cancer and helped her Nunu when that battle was lost. She was the best sister Francesca and Caitria Sands could have asked for — the love she had for them was Earth-shaking. She was their best friend and hero.

Left to remember her beautiful soul are her parents, Susan and Gene; her beloved Nunu, Crete Williams; her sisters Francesca and Caitria Sands; her sister Analei Campbell; her soul sister and best friend, Nicole Murray; her stepfather David Sands; her aunt Cathy and uncle Bob Lahm; her uncle Bobby Williams; her many cousins, including Bill and Kelli Ogden and Michael Ogden; her four cats; and many more family, friends, mentees and people in whose lives she made a difference. 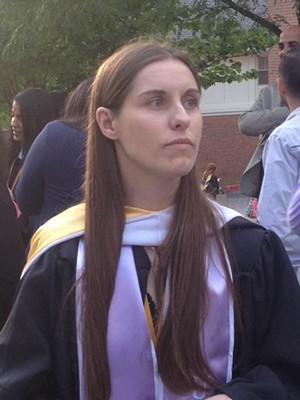 A celebration of Ginny’s life of service will be held on Thursday, October 21, 2021, from 5 to 8 p.m., at Essex Alliance Church in Essex Junction, Vt. (5 to 5:30 p.m. will be a reception line, 5:30 to 7 p.m. will be the service, and 7 to 8 p.m. will be a repast at the church. All are welcome.) Burial will be the following day at the Vermont Veterans Cemetery in Randolph, Vt. We will be leaving Essex at 9:00 a.m. for an 11 a.m. burial service (and we could sure use your support that day, too). In lieu of flowers, we request that you consider a contribution to the Virginia L. Sweetser Memorial Scholarship Fund for women veterans. Contributions may be made online at everloved.com/life-of/virginia-sweetser. Arrangements are through A.W. Rich Funeral Home in Essex Junction, Vt.

The family requests that those attending Ginny’s celebration of life wear vibrant colors if possible. The colors of the rainbow were Virginia’s signature flair. Since Stargazer lilies were Ginny’s favorite, please plant some Stargazer bulbs in the spring in your garden and think of Ginny every year they bloom. Our hearts are broken. IGY6;