Winooski native overcame orphanage abuse to live ‘in his own way’ 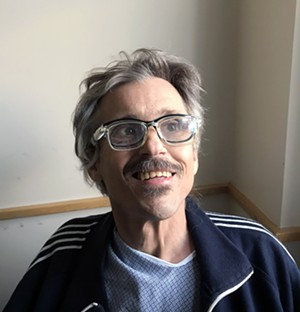 Todd A. Ploof passed away in Burlington, Vt., on October 2, 2019, at the University of Vermont Medical Center. He was cared for patiently and lovingly by his partner, Nikki Bove; his family; and the staff at UVM.

He was born in Winooski in 1966 at DeGoesbriand Hospital and lived a tumultuous life of health struggles, treatment and homelessness. His childhood was shaped by horrible experiences at the St. Joseph’s & Don Bosco Orphanage in Burlington, where he lived from age 5 to age 10. He was dropped off at the orphanage by a family member who trusted the orphanage to take good care of him. They did not. The abuse he was subjected to deformed his life.

It did not kill his spirit, however, which remained undiminished by these difficulties. He was a very funny guy — well skilled at charming authority figures. He was probably best known for his signature look of wearing three pairs of dollar-store reading glasses at the same time — in lieu of prescription lenses. Being friends with Todd was a wild and largely joyous ride.

There were so many people who cared for Todd and supported his growth and life, from the staff at Pathways to the staff at the Washington County Diversion Program and so many, many more. He often expressed his gratitude for those who helped him along. These social services are part of his story, too, and they supported his work of overcoming and of living his own life with its own happiness in his own way.