Accomplished chemist was behind many legacy inventions in the chemical world 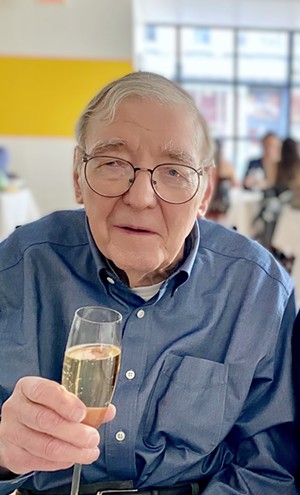 Tom was born in Baltimore, Md., on January 26, 1930. A first-generation American, Tom was encouraged to study hard and apply himself in school and life. He attended Loyola Blakefield High School and then went on to Loyola University Maryland to study chemistry.

Tom enlisted in the U.S. Army, rising to the rank of master sergeant. He served in active combat in the Korean War and was awarded a Bronze Star for his bravery on the battlefield.

Tom was an accomplished chemist and enjoyed a long career. In his early professional years, Tom was part of a small team that developed pure hydrazine to fuel the U.S. space program's Apollo mission. He developed and patented the world's first associative thickener (found in household detergents, among many other things). His work as a polymer chemist, improved paints and shellacs, and impacted so many other commercial and household products. In 1975, Tom invented Crosslinker CX-100, which is still on the market today and was one of Tom's many legacy inventions within the chemical world.

Diagnosed in 1995 with stage IV colorectal cancer, Tom retired from Zeneca Resins (now AstraZeneca) in January 1996 to focus on his health. He beat cancer, which was a surprise to his medical team.

Tom worked diligently to be the best that he could be across the board. When in high school, Tom excelled in academics, including being named Maryland's top student in physics. Later in life, Tom was a ranked chess player who enjoyed attending weekly matches in Andover, Methuen and Nashua. He had the opportunity to play Grand Masters and even won some of those matches. Tom was an advanced skier and would take every opportunity to get away to ski. After returning from Korea, Tom spent two weeks skiing at Gray Rocks in the Laurentians each year. In 1959, he met the love of his life there, Micheline Hogue. A whirlwind long-distance relationship began. The two married just 10 months later, on January 12, 1960. They moved to Cincinnati and then to Massachusetts, raising three children in Arlington. Micheline was Tom's guiding star and the light in his life.

Tom took great pride in the curb appeal of his home in Arlington's Arlmont Village. He spent weekends mowing the lawn and pruning the hedges and forsythia so that it was perfect. He found great joy in watching Andrew play baseball in his younger days. The family was Tom's No. 1 priority, from being a good provider for them to ensuring that the kids were afforded every educational opportunity. This included "Educational Sundays," when Tom would choose a museum or event to bring the family to expand their knowledge. Those Sundays were impactful in their adult lives.

Every year, the family took two weeks to vacation in Wolfeboro, N.H., where Tom came alive. From reading books to sailing and going for breakfast treats at the Yum Yum Shoppe to horsing around with other dads on the dock, he relished those two weeks. Tom encouraged his children to continue to vacation in Wolfeboro so his grandchildren would also have this special place etched into their souls. He enjoyed seeing all the pictures from those vacations and hearing about the stories.

Tom and Micheline moved to Shelburne, Vt., in 2008. In Vermont, he joined the Rivercrest Homeowners Association as treasurer. He took painting classes at the Shelburne Craft School, enjoyed welcoming friends from afar and showing them around the area, hosting wine and cheese parties, and socializing with the Aspen Circle neighbors. He especially enjoyed getting to spend time with his grandchildren. Much to their delight, he would always lead the way in ordering dessert when with them — never to share, they each were to have their own dessert.

Tom is preceded in death by his beloved wife of 62 years, Micheline Hogue Junas, who died just 27 days before him. He is survived by his children, Elise Johnson and her husband, Greg, of Bedford, N.H.; Andrew Junas and his wife, Laura, of Wakefield, Mass.; and Nicole Junas Ravlin and her boyfriend, Chris Downing, of Charlotte, Vt. His four grandchildren meant the world to him: Ethan and Colin Ravlin and Evan and Isabelle Johnson. He shared his love of chess, history, science and technology with them. He is also survived by his sister-in-law Suzanne Hogue Léveillé of Île des Sœurs, Québec; his nephews Yves and Alain Léveillé; and his cousin Ted Potthast of Towson, Md. He is preceded in death by his parents, Adolph Junas and Catherine Burke, and his sister Mary Ann Junas.

A joint celebration of Tom and Micheline's lives will be held on Saturday, May 7, 2022, 11 a.m., at Charlotte Congregational Church. A lunch reception will immediately follow, where Tom and Micheline will be toasted — red wine for him, Champagne for her.

Please consider a gift to Spectrum Youth & Family Services (indicate that the gift is in memory of Tom Junas). Tom believed in the Spectrum mission and was a donor in recent years.

We are grateful for the exceptional care and compassion the nurses and team gave at the McClure Miller Respite House; Dr. Baad and nurse Jess at Good Health; spiritual support from the Charlotte Congregational Church; and all of our family friends who continually lifted us up this past month.

In closing, Tom loved a good "dad joke" and would subject us to them often, so it is only fitting that we leave you with this: How do you keep a turkey in suspense? We'll tell you tomorrow.