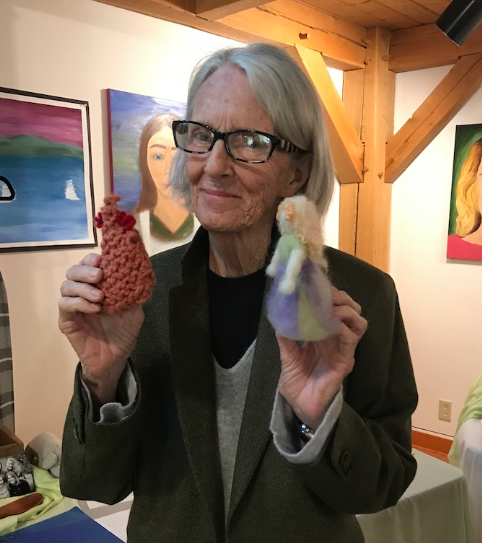 Tennant Glenn Davitian, artist, tastemaker, beloved mother and friend, departed to the Pure Land of Great Joy as the sun set and Venus rose on Wednesday, May 20, 2020, near her home in Burlington, Vt.

Tenny was born in a snowstorm in Buffalo, N.Y., on February 5, 1937. The Second World War was gearing up, and Britain’s King Edward had just abdicated for the “woman he loved.” Picasso’s “Guernica” hit the world stage, while Kahlo, Miro, Magritte and Dali produced the mind-expanding work that defined the century and, ultimately, the art of Tennant Davitian.

While history marched on, Tenny spent her childhood in nature and imagination, by the falls of the Cazenovia Creek in East Aurora, N.Y. Here she lived and played with her Scotch Irish artist parents, Bob and Bea Glenn, and her beloved older brother, Sturgen.

Bob Glenn was an immensely talented artist who left his career in New York to run the family-owned Emulso Corporation (“makers of fine cleaners, polishes and waxes”) in Buffalo. A Renaissance man, he also built an exquisite home in their aerie over the falls. With the strength of a bull and the softest of hearts, Ten’s dad remained the great influence of her life.

Bea, her fairy mother, cultivated Tenny’s young imagination. Ten loved their “teas” with Midder Bear and many forest visitors. Ten’s abiding curiosity, excitement to improvise and desire to connect were nourished during these early years. Her love of singing, storytelling, dressing up, party planning, making pictures and producing plays never dimmed, making her the most unique of grown-ups.

East Aurora was a close-knit village community. Tenny grew up next to her grandparents; down the road from her uncle, aunt and cousins; and in the midst of so many remembered friends. “Heading up town for a milkshake” was a shared family joy, healing all manner of infirmities. Tenny attended the local elementary school and maintained an ever active social schedule. She went to the progressive Park School of Buffalo with her brother during their high school years (where her mother had been schooled in its first class of 5-year-olds in 1912).

At Park, Ten’s success as Mad Margaret in Gilbert and Sullivan’s Ruddigore (“I lost my shoe and made them laugh”) turned her head to acting and cemented her love of audiences. During her late teens, Tenny was drawn to Buffalo’s jazz hot spots, where fellow outliers and master musicians welcomed her warmly and invited her to sing. Milt Jackson, Lester Young, King Pleasure, Dave Brubeck. Later, Gilberto and Jobim became the soundtrack of her life and shaped the way she saw and heard the world.

Even at a young age, Ten was aware of the places that “lay beyond.” She would often remember the moment when “I lay in bed at my grandmother’s house in Buffalo and heard the cars going round the circle, thinking, I want to live where the traffic runs all night.”

So it was no surprise when Tennant attended college on the train line to New York City. At Bard College, in the mid 1950s, Ten finally found her tribe of fellow actors, musicians and artists who would soon rule the arts world. She also found her best friend, Corinne McGrady, who has remained a source of constant love.

When Tenny finally did arrive in New York at 19, ready to become an actress, she discovered she’d lost her purse on the train. She called the only person she knew, a bartender at the Imperial Bar on 30th Street and Second Avenue. While chatting at the bar, she was approached by Sam Davitian, a neighborhood “guy” who said, “You look thin. I’ll take you out to dinner.” Being short on funds himself, Sam went home to his mother’s to eat, shower and shave. Returning to take Tenny to Chicken Delight, he watched her eat (burger, milkshake, fries) and proposed marriage on the spot.

Sam was, in fact, her dream come true. Armenian. New York. Charming like Frank Sinatra. Funny like Sid Caesar. Smart like no one else. Sam was the “someone who could help my children do their homework.”

They were finally married on September 5, 1959, at the “Little Church Around the Corner,” a liberal Episcopal church willing to unite Catholics and Presbyterians. A little over a year later, they baptized their first and only child together, Lauren-Glenn (named after the screen beauty of the time, Lauren Bacall).

The 1960s were a period of profound cultural creation, and Tenny and Sam invented themselves. Their friends — designers, performers, agents, mobsters, Wall Street types and horse players — were devoted to them. After an entertaining Saturday night dinner party, this charismatic, funny and unusual couple liked nothing more than a slow Sunday morning reading the New York Times, Jonathan Schwartz on the radio and bagels for breakfast.

Tenny was (and will ever remain) known for her sublime taste. She could rearrange or redecorate in a blink, pick the perfect gift, and dress stars of screen and stage.

One of her friends, Ruth Gordon, remembers: “Before I opened my antique shop on Second Avenue, Tennant came in to take a look. The store had a copper tiled ceiling, and she told me that if the ceiling were to be painted chocolate and the walls apricot, it would be great for showing antiques. I followed this advice and was really pleased with the result. I also remember visiting your home, where Ten served a carrot soup that was the best soup I ever had in my life. Whatever she did, she did to perfection. I never met a woman with taste as right on as Tennant's — and I worked with many in the fashion business.”

Tennant was a prolific artist. In her more entrepreneurial moments, she ran two galleries (San Juan and Montpelier) and a clothing shop (Maine). She favored “outsider art” but would look and talk about any piece as a way to gain insight into the culture, the time and the person she was talking with. She did not think of herself as a smart woman, but she was deeply insightful and truly brilliant.

Tennant ’s homes were beautiful. From her first apartments on the East Side to her homes in Long Island City, Kennebunkport, Burlington and Lake Worth, Fla., she picked every color, placed every artifact, hung each painting, shelved every book and arranged each implement with careful thought and inspiration. She loved every one of her homes, including the 1938 Burlington bungalow she moved into last October.

In this home, as lovely and spare as the others, she achieved her ultimate vision, inspired by an interview with David Lynch. When asked by a reporter what he planned to do with his living room that held only a chair, he replied, “Remove the chair.”

Ten loved to travel and had so many more places to visit. She traveled to Rome and Greece in 1970, followed by trips to Denmark, Tunisia and Portugal. In the early 1980s, she lived in Puerto Rico and Mallorca. She made it to Italy to visit her Roman “family” and accomplished a long-awaited trip to New Mexico in 2014. The images and people from these trips never ceased to influence her creative work.

Above all, Ten considered her daughter, Lauren-Glenn, to be her greatest achievement. Their love for each other was mutual and deep. “My mother is my hero. She endured disappointment and sadness. But she never gave up. She sought joy every day. She left no heart unturned. Her vision, humor and grace are a gift to us all.”

Tennant was a role model for her daughter’s teenage friends at the Marymount School in the late 1970s. Anne Moore remembers: “She showed us how to be.” Jean Bambury, Ten’s pen pal of 40 years, notes: “Tenny was the first adult to address me without condescension, speaking to me as though I were an adult. She was lithe and angular and had a smile that gave off real warmth. I remember the good feeling I had.”

And Amanda Neal recounts this story: “I don't know if you remember that Tennant once advocated for me at Marymount when she was heading up the PTA. I'd written a review of hot dogs on the Upper East Side for our school paper and concluded that Sabrett hot dogs were the best — even better than the ones at Nathan's. One of the parents who was involved in fundraising did not like this, because Nathan's had made a nice donation to the school, and she asked me to write a retraction. However, Tennant intervened to take a stand on this, and I didn't have to write the retraction. I think your mom wanted me to learn not to back down from an honest statement and that some things are more important than pleasing donors. This story seems quaint now, but your mom — with her stand on this small matter — again had an important impact.”

Tennant’s entire life and imagined experience can be found in her collection of 20 black spiraled journals, created over the past 20 years. The journals contain her masterpiece paintings, collages, family histories, postcards from her beloveds, photos of her Jack Russells, political commentary and advice for the ages: “Navigate the uncertain.” “Leave the party when you’re having the best time.” And: “The stories of our lives are what save us.”

Ten is predeceased by her parents; her beloved brother, Sturgen Hawkins Glenn; her former husband, Sam Davitian; and her best friend of the last 30 years, Jo-Ann Golden. She is survived by her daughter, Lauren-Glenn; adored son-in-law, Mark Johnson; and granddaughter, Stella Rose. Her relations include her devoted friend (since the age of 5) and sister-in-law Judith Glenn and nephew Pepper Hawkins. Ten was also aunt to Jennifer Willison and Andy English, and sister-in-law to Marie Glenn. With regret, she left her many friends in Lake Worth, Burlington and across the world, including Peter Robinson, Diane Gage, Corinne McGrady, Harvey Litwin and Karen Brown.

Special thanks to Dr. Karen Sokol, the many capable caregivers of the Community Health Centers of Vermont, Armistead Home Care and the University of Vermont’s Home Health & Hospice. In particular, we extend our gratitude to the nurses and staff at the McClure Miller Respite House, also known as “the stairway to heaven.”

Please consider contributions to the McClure Miller Respite House or your favored charities that benefit animals, children and veterans. Tennant would be so pleased to know that her caring continues.