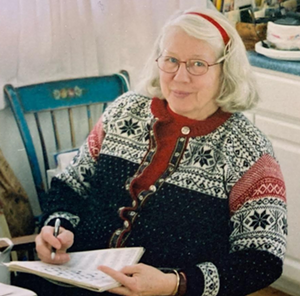 Susan J. Wheeler, of Burlington, Vt., passed away peacefully on August 26, 2022, at the age of 90. She was born on October 18, 1931. She grew up in Wellesley Hills, Mass., and attended Beaver Country Day School. After graduating from Wellesley College, she lived in Denver, Labrador and San Francisco before settling in Burlington in 1969.

Known for her wit, her tall tales and her humorous takes on everything from radio transmission to crow behavior, Susan cut her own path through life and touched many lives along the way. She was known for teaching, community service and political activism. She was a mother of six, a very active parishioner at St. Paul’s Cathedral and a host to many international travelers. She served as a justice of the peace, a guardian ad litem, a fire commissioner and a Vermont state representative from 1997 to 2002. Despite rancorous debate over contentious issues, Susan was a very Vermont Democrat and maintained strong relationships across the aisle throughout her life. Regardless of party affiliation, she believed everyone has a voice and would urge anyone to speak up when it really matters. She continued to serve as justice of the peace and as a teacher and was proud to have earned the title of “tough old broad” from a local political columnist.

Susan held court wherever she was and remained sharp as a tack to the end. Her family is grateful to the staff at the Residence at Shelburne Bay for the wonderful care she enjoyed during her final years. Because of their kindness, her every day was “peachy.”

A funeral will be held at St. Paul’s Cathedral in Burlington, Vt., Saturday, October 15, at 10:00 a.m. Gifts in Susan Wheeler’s honor may be made to the Committee on Temporary Shelter (COTS), the Vermont Foodbank or any organization working to empower women to make positive social change.