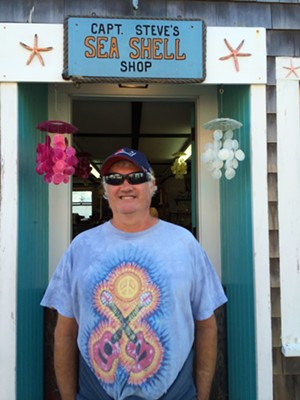 Steven "Boj" William Keough died May 25, 2019, with his family surrounding him. He was born in Bennington, Vt., where he lived with his parents, Florence Butler Keough and William "Bill" Keough, and his sister Joyce Walden.

He moved up to Chittenden County when he attended Saint Michael’s College from 1976 to 1980 and met lifelong friends. After receiving his bachelor’s degree in business from St. Michael’s, he attended graduate school at Virginia Commonwealth University, where he studied recreational sports management. Although he then went on to a career of painting, sports remained a passion throughout his life. Steve was a devoted Boston sports fan — particularly the Red Sox, Patriots and Celtics.

In 1993, he met his wife, Julie A. Welkowitz, while attending University of Vermont women’s basketball games. They married in 2001 and had two children: Joshua Samuel Keough, age 17, and Shaina Rae Leanna Keough, age 14. Steve and Julie raised their children in Richmond, Vt. Steve was an extraordinarily loving father and husband who coached his children in multiple sports, attended every game possible of his children and was there for his family in every way. In addition to his passion for his family and sports, Steve was an ardent Grateful Dead and Phish fan. He also enjoyed traveling with his family.

As Steve may have wanted to share in parting:

"Well the first days are the hardest days, don’t you worry any more.

Cause when life looks like easy street, there is danger at your door.

Think this through with me, let me know your mind,