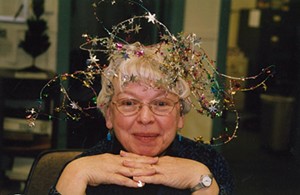 Stella Robak Bukanc passed away on the morning of December 4, 2022. She was diagnosed with stage IV cervical cancer 11 months ago, one month after her husband, Michael Bukanc, suffered a traumatic brain injury while giving a talk to middle school students about his experiences surviving the Holocaust. Stella is also survived by her two daughters, Kat and Rachel Bukanc. Although this has been a very difficult time for the Bukanc family and for close friends of the family, they experienced a true gift when Kat moved back to Vermont to live with and care for both of her parents. Rachel and her husband, Cory Campbell, also spent time over the year sharing caregiving duties. This is a testament to Stella, who valued family and community and took care of her own ailing mother at home as she suffered from Alzheimer's.

Stella was born in New Bedford, Mass., to Stella and John Robak. She received a BA from Bates College in 1965 and married Michael Bukanc in Maine in 1967; they moved to Vermont shortly after. Stella was a homemaker, cared for the family and worked with the League of Women Voters until 1983, when she went to work full time. Stella spent the bulk of her career working for the State of Vermont, initially as a quality assurance specialist and later as a policy analyst.

All who knew Stella understood her unconditional love and care, selflessness, and commitment to social justice issues and action. Stella was active in the League of Women Voters and fought to help pass the Equal Rights Amendment. She supported Habitat for Humanity and the Respite House. Stella not only provided a safe and loving home for her daughters but also for their friends in times of need and crisis.

Stella and Michael have been active members of Ohavi Zedek Synagogue, and she was known to cook up a storm for many social events in her work on the kitchen committee. Friends and family were lucky to enjoy the results of her amazing culinary dishes.

Stella was also fortunate to travel with Michael. Trips included travel to Israel, Sicily and Malta, Chile, the Pacific Northwest, and the Grand Canyon, as well as a European river cruise and two Caribbean cruises.

A special thanks to the University of Vermont Health Network Home Health & Hospice care team, who provided care with such warmth and dignity.

There will be a memorial service for Stella Bukanc, followed by a meal of bereavement, on Sunday, January 8, at 12:30 p.m., at Ohavi Zedek in Burlington. המקום ינחם אתכם בתוך שׁאר אבלי ציון וירושלים. May the mourners be comforted along with the mourners of our people, and may Stella's memory be an enduring blessing.