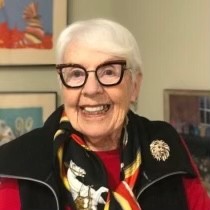 Sheila Dugan Barton, of Burlington, Vt., passed away peacefully at home on September 26, 2021. Sheila was born in Kalispell, Mont., and spent her childhood in Salt Lake City, Utah, with her parents, Jack and Lillian Dugan, and her brother, John Brooks Dugan. Sheila graduated from the University of Utah and was a proud member of Pi Beta Phi sorority. She met her late husband, Robert “Bob” Barton, at the University of Utah, and the two were married in Salt Lake City on June 24, 1953.

Sheila had three children: John, Lisa and Brooks. The family lived in Jackson, Wyo., and San Francisco, Calif., before moving to New York City in 1960. In New York, Sheila worked for John V. Lindsay’s mayoral campaign and was a member of the Ecumenical Council of the Holy Family Church. In 1969, Sheila and her family moved to Woodstock, Vt., for Bob’s new role at the Woodstock Inn. Sheila was elected to the Union School Board in Woodstock and opened her first of many antique shops. She was a woman of endless hobbies and interests, and her lifelong love of antiques and collectibles was a true passion.

In 1982, after Bob passed, Sheila felt the tug of a new adventure and moved to the Ocean Reef Club in Key Largo, Fla. In Key Largo, she opened another successful antique shop with her daughter Lisa and made many great friends. She spent a lot of her time playing golf and spoiling her seven grandchildren on the boat and at the beach.

Eventually, Sheila moved back to Vermont and settled in Burlington in 2005. She spent most of her late life surrounded by family at Sunday night dinners and playing duplicate bridge as a member of the Burlington Bridge Club, where she was known as a fierce competitor and loyal partner.

Sheila will be remembered for her wonderful qualities — her capacity to love and learn; her listening heart, open mind and beautiful smile; and her courageous and resilient spirit. Sheila was fond of the little things in life and enjoyed reading the Sunday newspaper, drinking martinis (with three olives), eating hot dogs, slurping oysters, and beating her children and grandchildren at Gin Rummy.