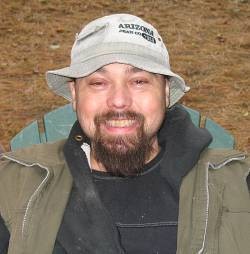 St. Albans – Sean Lawrence Peters, a lifetime member of the St. Albans community, passed away unexpectedly at his home on Wednesday, September 27, 2017. As an active member of the community, Sean contributed largely to the area’s art and music scene from the time he was a youth. Sean was best known for rocking the local and New England stages with his amazing vocals in the numerous bands he played with.

Born in St. Albans on August 13th, 1970, Sean was the son of Richard James Peters, Sr. and the late Carolyn Sue (Trombley) Peters.

Sean was a 1988 graduate of Bellows Free Academy. While a student at BFA, Sean started his journey as a musician with his first band – Impact. The success of this band began a lifetime path of singing and entertaining. Sean was also a very talented artist, whose creations and drawings were enjoyed by many. His artwork adorned t-shirts and greeting cards sold locally, as well as, hung in the homes of many. Sean freely drew for anyone who requested it, always happy to bring joy to others. As much as Sean liked producing art for others, his greatest passion was working on creative projects with his two boys.

Those planning an expression of sympathy are asked to consider the St. Jude Children’s Research Hospital, P.O. Box 1000 – Dept 142, Memphis, Tennessee 38101-9908. As Sean was a sufferer from Childhood Diabetes, any donations to the Diabetes Association would also be appreciated.

To send Sean’s family a written expression of sympathy or share a memory, please go to his on-line guest book at www.healdfuneralhome.com.