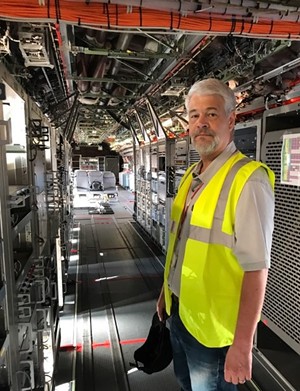 Scott Thomas Fusare, 58, of Burlington, Vt., passed away on Friday, July 9, 2021, in the Respite Home in Colchester after a long battle against pancreatic cancer.

Scott was born on March 12, 1963, in Elmira, N.Y., to proud parents John and Carol Fusare. After graduating from Elmira High School, he joined the U.S. Army in 1981 and trained at Fort Leonard Wood, Mo. In 1984 he started to work for the National Semiconductor in Connecticut. In 1990 he relocated to Vermont and started his career at LAM Research, a contractor for IBM, as a self-taught electrical engineer. Scott was able to complete his bachelor of science in electrical engineering in 2005 at the University of Vermont, where he was voted the top engineering student for his final two years. After graduation, he joined the engineering staff at Goodrich Corporation in Vergennes, which was later purchased by UTC Aerospace systems and Collins Aerospace (part of Raytheon Technologies).

At UTC Aerospace, Scott worked on a variety of R&D projects developing novel sensing and monitoring systems for commercial aircraft. A large part of his work focused on wireless sensors, resulting in four issued U.S. patents. Those inventions allow developing lighter, less expensive and more reliable sensing systems for aircraft, ultimately leading to safer flight. More recently, Scott was the key team member on an R&D project to develop a new type of pressure sensor-based fuel gauging technology being used on the Airbus A350. He played a crucial part in design, installation and flight testing of the prototype system, which will be a key enabler for new aircraft types using renewable and ecologically sustainable fuel.

Scott was a natural-born scientist with a deep curiosity and passion for all types of science and technology. He loved spending time in his basement laboratory inventing elegant devices to explore the secrets of electricity, light, radio waves and chemistry. He made devices that made indoor lightning, as well as devices that levitated and made people’s hair stand up. Scott was extremely generous with his talents and always willing to help others with their science projects and inspire many aspiring scientists.

Scott loved his family and friends, as well as spending time with them. He would go fishing with his stepson, teach him to drive and attend his soccer games. He was a go-to person for his daughter to help with math, chemistry or physics homework. He loved camping and visiting scientifically interesting places, like geysers at Yellowstone or lava tubes in Hawaii. He spent hours with his science friends tinkering with his equipment in his basement lair.

In lieu of flowers, please consider a donation in Scott’s memory to the Pancreatic Cancer Research fundraiser his daughter, Veronika, is running at gofundme.com/f/pancreatic-cancer-research-honoring-scott-fusare?qid=67fa75dd2c570eebd347a99ba31a6c88.

According to Scientific American, while pancreatic cancer is rare — accounting for about 3 percent of all cancers — in 2019 it was the third-leading cause of cancer deaths in the U.S. and is expected to soon overtake colon cancer for the No. 2 spot, right behind lung cancer.

Arrangements have been entrusted to the care of the Cremation Society of Chittenden Country, a division of the Ready Funeral Home. Please visit cremationsocietycc.com to place online condolences.