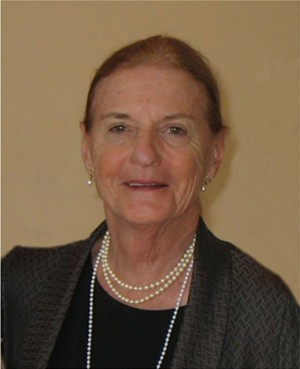 Sarah Virginia de Ganahl Russell was born in New York, N.Y., on April 2, 1931, and died in Vero Beach, Fla., on August 16, 2018. She was the daughter of Joe de Ganahl and Josephine Coombs de Ganahl. She grew up in Scarsdale, N.Y.; McLean, Va.; and both Sitka and Juneau, Alaska, where her father was a U.S. Navy Reserve pilot and Sitka Naval Air Station Commander before and during World War II.

Virginia went on to attend the Sidwell Friends School, the Madeira School, Mount Vernon Junior College and George Washington University in Washington, D.C., where she met her first husband, Thomas Hale Russell. They married on June 21, 1952, and had seven children. In 1954, Tom and Ginny moved to Yampa, Colo., where they raised cattle with her brother Chuck and his wife, Pat, and enjoyed 11 years ranching and raising children together.

After the Russell family moved to Brandon, Vt., in 1965, Virginia became an active member of the community, volunteering for the American Cancer Society and the Otter Valley School Board. Some of the many organizations and causes she championed, with both energy and support, include the Brandon Public Library, Green Mountain College, the Vermont Ski Museum and the Vermont Marble Museum. In later years, she was a driving force in the renaissance of Brandon as a dynamic arts community. In 2016, Virginia received an honorary doctorate of humane letters from Sterling College.

There is little question that Virginia gained her sense of adventure from her parents; her father traveled with Admiral Byrd to both the Arctic and Antarctic, and her mother was one of the first women to earn a pilot’s license. This adventurous and curious spirit led Virginia to travel the world. After Tom’s death, she traveled to China, where she met her second husband, Charles Kimmel, on the Orient Express. She valued intellectual pursuits, and her bookshelves were filled with books on literature, history, science and poetry. She was constantly seeking new insights and loved to engage in spirited discussion with people making a difference.

A passionate and vivacious personality, Virginia left an impression on anyone she met. She loved to meet new people and had a singular knack for turning strangers into immediate friends. Whether speaking to a new acquaintance or a longtime friend, Virginia had the ability to make people feel respected and heard. Anyone who knew Virginia could testify that you were unlikely to meet another person like her.

Her love for others drew her to service in many causes and organizations, where she was known as a dynamic innovator. As a longtime fundraiser, supporter and board member of the Vermont Symphony Orchestra, she helped bring the VSO to new areas of Vermont. She served as president of the Dvorak International Federation, which encouraged typists worldwide to move to a more efficient keyboard layout. She founded Classic Concepts, later Natural Elegance, which sold marble products, and worked to bring the marble and granite industries of Vermont together. As chair of the board of Sterling College in Vermont in the early 1990s, she made tough decisions that are credited with setting the organization on a stronger footing for years to come. She supported Vermont Democratic candidates, hosting fundraising parties, including a regular event after Brandon’s renowned July 4th parade.

In 2003, Virginia moved to Vero Beach, Fla., with her second husband, Charles Kimmel, where she continued her passion for engaging with people through continuing education and the arts. She was a dedicated supporter of the Atlantic Classical Orchestra in Fort Pierce, Fla., as well as the Vero Beach Museum of Art.

The family extends special gratitude to Toni Bittner, Shamira Ross, Margarette Gedeon and Derek Bernard and others, for their dedicated and loving care of Virginia in her last years.

Donations may be made in Virginia’s name to the ALS Association, Washington, D.C., or to Sterling College, Craftsbury Common, Vt.

A celebration of her life will be announced later. It will be held in Vermont.