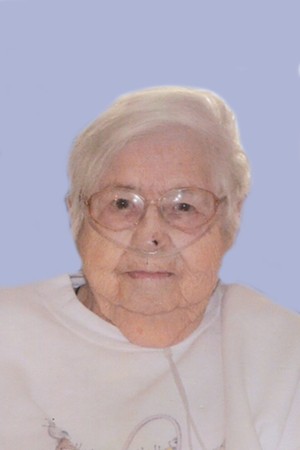 Born in Highgate on, March 7, 1927, she was the daughter of the late Benjamin and Bertha Bard. Ruth graduated from the former Highgate High School and in 1945 was married to Joseph “Jake” Vincelette. They were married for 24 years and had four children together.

Ruth’s favorite hobbies included playing Bingo every Monday and Friday nights regardless of the weather and babysitting her grand and great grandchildren.

She is survived by her brother, Walter Bard and his wife Victoria of Swanton; her daughter, Jane Scanlon of St. Albans; her daughter, Tabitha and Koran Scanlon of St. Albans; Ruth’s grandson, Wayne Shedrick and his wife, Penny of Swanton, their children, Adam, his wife Kellsie Shedrick of St. Albans, Alex Shedrick of Swanton, Mitchal’s Shedrick and his girlfriend Audie and Mitchal’s children, Mitchie, Brennon and Landyn Shedrick all of Swanton, Matthew and Mark Vincelette, Darcy Willard of North Carolina, Robert “Dew” Menard of Florida, Conrad Menard of Texas and Thomas Menard of South Carolina as well as many great grandchildren and nieces, nephews and cousins.

Ruth’s family wishes to thank the Franklin County Home Health Agency and the nurses and staff of the Northwestern Medical Center for their excellent care and support.

A Funeral Service will be held Tuesday, March 21, 2017, at 2 p.m. from The Kidder Memorial Home, 89 Grand Ave., Swanton. The Reverend Megan Stowe will officiate. Interment will take place in the spring at the family lot in Riverside Cemetery.

Friends may call at the funeral home on Tuesday from 1p.m. until the hour of the funeral.

Gifts in Ruth’s memory may be made to the Franklin County Home Health Agency, 3 Home Health Circle, St. Albans 05478.