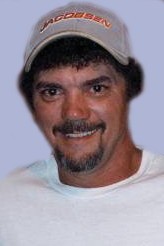 Rusty K. Brace, age 52 years, passed away September 28, 2016, with his loving family gathered around him. Rusty had suffered and fought a valiant battle with cancer for many years.

Rusty was born December 21, 1963, in St. Albans, Vermont to his biological mom, Mary Etta Brace. Mary had fought throughout her short life with tuberculosis. She loved her family very much and did everything that she could for them. She was a loving mother who put her children first every time. Sadly TB took her from us at only 36 years of age.

After Mary passed Rusty came to live with Jake and Claireta Sartwell, he was about one year old at that time. His presence always made their lives brighter, even when we didn’t always agree.

Rusty leaves his daughter, Alisha Chaloux her husband Laurin and an unborn grandchild; his loving life partner, Tina Cross; his parents, Jake and Claireta Sartwell; his sisters, Jackie and David Dragon, Amy Sartwell and her family, his brothers, Leo Brace and his wife Gus, Terry Brace and wife, Kathy, Allen and Mitae Brace and Jay Sartwell and his wife Jill. Rusty’s family was made up of so many including Tina’s mom, Fran and companion Gary, Tina’s son Josh companion Sara and their sons Kevin and Hayden who had a special relationship with Rusty.

Rusty had so many friends that to put them all on paper would be nearly impossible. He was a born mechanic and spent most of his working life doing just that. He was employed for a time in Texas as a farm equipment mechanic. On his return to Vermont he was employed by Boucher John Deere Equipment; from there he went to Champlain Equipment also as a farm equipment mechanic. His last full time employment was at the Champlain Country Club also as an equipment mechanic. He worked on many independent farms throughout the area. Rusty will be missed by not only his immediate family but also by those he so faithfully assisted when they needed them.

A Funeral Service will be held Saturday, October 1, 2016, at 1 p.m. from The Kidder Memorial Home, 89 Grand Avenue, Swanton. The Reverend Patrick Hoadley will officiate. Interment will follow at the Sartwell family lot in the Highgate Center Cemetery.

Friends may call at the funeral home on Saturday from 11 a.m. until the hour of the funeral.

Gifts in Rusty’s memory may be made to the American Cancer Society, New England Division, 55 Day Lane, Williston, 05495