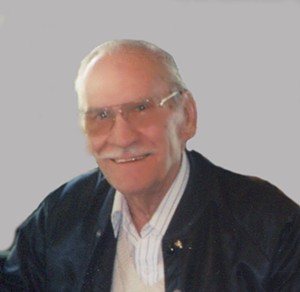 Rudolph “Rudy” Chapola, age 95 years, a longtime resident of the Bechard Road in Champlain, NY, died late Saturday morning, July 9, 2016, at the St. Albans Healthcare and Rehabilitation Center with loving family at his side.

Born in Erie, Pennsylvania on, July 29, 1920, he was the son of the late Joseph and Anelia (Canislanska) Chapola. He attended schools in Pennsylvania and on, September 30, 2008, was married to Rita (Gagne) White who survives him.

Rudy faithfully served his country in the United States Army during World War II on the 805th Tank Destroyer and received his Honorable Discharge on, June 18, 1945. He was a longtime member of the Veterans of Foreign Wars, Post 1418 in Mooers, NY, The American Legion, Creller-Landon Post #60 in Alburgh as well as the Disabled American veterans.

For 27 years he was employed as a truck driver for various companies and enjoyed hunting and traveling especially with his wife Rita.

Funeral Services will be private and at the convenience of the family. Interment will take place at a later date in Arlington National Cemetery.

Gifts in Rudy’s memory may be made to the American Cancer Society, New England Division, 55 Day Lane, Williston, VT 05495 or to the American Heart Association, Vermont Office, and 110 Main St., Suite 3203, Burlington, VT 05401.

Arrangements are under the direction of The Kidder Memorial Home, 89 Grand Ave., Swanton, VT 05488