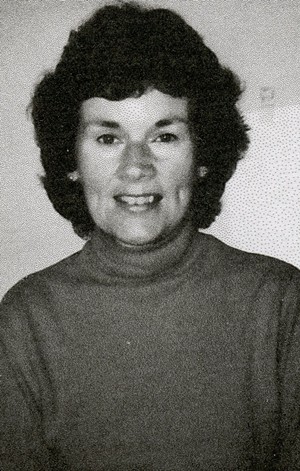 Roberta S. Alexander, 87, a longtime Craftsbury resident, died on Saturday, July 16, at the Manor nursing home with her family by her side. Roberta was born on May 30, 1935, in St. Johnsbury, the daughter of Gerald and Gladys (Wylie) Spaulding. For many years, the Spauldings lived in Craftsbury and St. Johnsbury.

As a little girl, Roberta attended the then-two-room schoolhouse in Craftsbury Village, followed by the Academy on Craftsbury Common, where she developed a lifelong love of learning. She was also on the basketball team that played in the half-court gym.

When she was 13, her younger brother, Gerry, was born, and she slipped naturally into the role of big sister and protector as her family moved several times between St. J and Craftsbury.

In the early 1950s, she met her future husband, Robert M. Alexander, in Glover at Urie's Pavillion Dance Hall on Shadow Lake. They dated while she was attaining a two-year degree in retailing at Green Mountain College in Poultney, as he worked on an engineering degree at Norwich University.

They were married on September 10, 1955, at the Church on the Common and then headed west to Colorado, the badlands of South Dakota and New Mexico while he worked for the Federal Highway Administration. His career path soon led them back to New England, where they lived briefly in Connecticut while he attended Yale University. Then they lived in Woburn, Mass., before finally moving back to Vermont.

Their sons, Peter and John, were both born in Barre in the early 1960s. While living in South Burlington as a homemaker, Roberta dipped her toe back into education by becoming a teacher's aide. This led her to a teaching degree from Goddard College and then, after moving to New Hampshire, a teaching position at Concord High School.

She developed the marketing and distributive education program there, where she taught for 16 years and was New Hampshire state teacher of the year in 1981, an accomplishment that her husband, Bob, speaks admiringly of to this day.

The local newspaper summed up her philosophy of educating as "an ability to make kids feel good about themselves; to listen and encourage them."

In 1988, Berta and Bob moved back to Vermont, first to the Common to help Gladys and Jerry and then down the road to Lake Hosmer, where they loved the sights and sounds of nature, especially the loons and the peepers in the spring. Family and friends visited often, enjoying Roberta's delicious meals and great company. Berta and Bob had a string of black labs, which they loved. They also had many kitties, because she loved cats, too.

As Bob became a consulting engineer, Roberta embarked on a second career as a Realtor and made many new friends at the Watson and Choice agencies, retiring in June 2011 after 22 years.

At the beginning of 2019, they left their beloved Mill Village home for the Craftsbury Community Care Center (4 Cs) assisted living center in East Craftsbury and then, during pandemic lockdowns, the Manor nursing home in Morrisville, where Robert still resides in the assisted living section.

Family and friends who were part of her life include her father, Gerald "Jerry" K. Spaulding (1908-1995); her mother, Gladys W. Spaulding (1912-2007); her brother, Gerry, who died on February 25, 2013; and her two sons, Peter M. Alexander of Manchester, N.H., and John R. Alexander of Milton, Vt.
Her nieces and nephews include Jessica E. Spaulding of Stowe and her daughter, Lili; and Travis D. Spaulding of Stowe and his wife, Rebecca, and their children, Mena, William and Bryer.

Two sisters-in-law in Rutland are Jean Hinson and Janet Alexander.

A memorial service will be held on Saturday, August 20, at 11 a.m., at the United Church of Craftsbury on Craftsbury Common, with Pastor Kim Larose.

Memorial contributions may be made to the Craftsbury Community Care Center (4 Cs) by mail at 1784 E. Craftsbury Rd., Craftsbury, VT 05826.