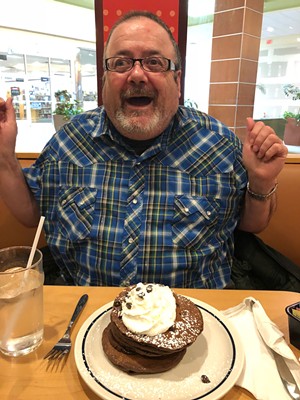 Robert Steven Brace, 61, of Duxbury, Vt., passed away quickly and unexpectedly on August 5, 2021. He was surrounded by family, with pictures of his beloved nephews looking down upon him.

Robert was an amazingly prolific and accomplished man.

First and foremost, Robert was a freedom fighter. He fought his whole life for the rights and respect of people with disabilities and accomplished as much as anyone ever has to make the world a better place for all of us. He was crucial to the closure of the Brandon Training School, where he was a resident in his youth. He was also a member of the group that successfully sued the State of Vermont to establish a system of community care for folks living with disabilities. The State of Vermont owes him a debt of gratitude for the humanitarian work he did during his lifetime.

Robert was a teacher. He was a renowned speaker who lectured around the state of Vermont on topics such as disability issues and his own life experience. He regularly spoke at the University of Vermont’s School of Medicine as well as its Interdisciplinary Team. He was also well known for speaking to groups at Vermont’s Designated Agencies. He even recorded a public service announcement with the governor.

Robert was a friend. He embodied love, empathy, kindness and generosity in a way that was unparalleled. He never missed a birthday, was always quick to show sympathy and support in times of need, and was immediately up for helping anyone who needed it. He could be counted on to give you the cowboy (or Hawaiian) shirt right off his back, and smile when he did it.

Robert was a hard worker. He answered the phones at Upper Valley Services in Moretown, Vt., for close to 25 years. He had infinite pride in his job, and he loved his coworkers dearly. The people who called were always treated to his cheery greetings, and his yell “DENNIS, YOU HAVE A CALL…” while the person was still on the line. His creative messages were a thing of legend, and there will never be a joy equal to the one he brought people with his infectious good cheer.

Robert was an uncle. This was a fact he often repeated and took extremely seriously. His nephews were his world, and he would do anything for them. He held, fed and watched them as babies. He played, helped and taught them as toddlers. He talked, joked and spent time with them as they grew older. Elia, Elia and Leo have never known a world without his love, care and never-ending generosity. Every child should be so fortunate as to have an Uncle Rob.

Robert loved his family. Robert spent as much time as he could with his beloved mother, Elinor, until her death in 2006. Although he did not see his brothers and sisters as much as he would have liked, he loved them and often thought fondly of them. He also loved the Vecchione family and was an integral part of the homes and lives of both Ali, Nicole and Elia; and Leo, Carla, Elia and Leo. He also loved Al, Linda, Grandma and Aunt Laura and the rest of the extended family. He had often spoken of “becoming a Veckerone.” The truth is that he has been one for over 25 years.

Robert liked to remind everyone that despite the weather, despite the troubles in the world and despite whatever else might be challenging you, it is a beautiful day and you are doing a good job. Yes, you are, Robert. Yes, you are.

A life celebration will be held on September 25 at 2 p.m. at the Waterbury Congregational Church on 8 N. Main St., Waterbury, VT. All friends, family and colleagues are welcome to come (preferably in Hawaiian or cowboy shirts) and share the inspiring and joyful stories that filled his and all our lives. In lieu of flowers, please consider making a donation to the Robert’s Beautiful Day Fund, a nonprofit being established in Robert's name to provide grants to people who experience disabilities in order to help them have one of Robert’s famous beautiful days. Donations can be made on GoFundMe: gofundme.com/roberts-beautiful-day-foundation.