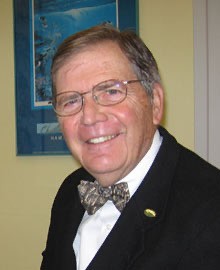 Robert Bernard Lawson, 81, of Williston, Vt., passed away on May 12, 2022, following a courageous, decades-long battle with Parkinson’s disease.

Robert was born on June 20, 1940, to Robert Bernard Lawson Sr. and Isabella McPeake in Bronx, N.Y.

After graduating in 1961 with a bachelor of arts in psychology from Monmouth College, Robert went on to earn a doctor of philosophy (1965) in behavioral science from the University of Delaware. Robert enjoyed a long and illustrious career as a faculty member in the Department of Psychology at the University of Vermont. During his 44-year tenure at UVM, he also served in multiple administrative roles. Robert’s professional accomplishments include publishing eight books, 30 journal articles, mentoring 11 PhD students, teaching a large variety of undergraduate and graduate courses, and receiving the prestigious George V. Kidder Outstanding Faculty Award (2003).

Robert was an advocate for university athletics and a devoted fan of UVM Catamount Hockey. A beloved professor, community member and father, Robert led with courage and compassion. He shared his love for education, hockey and storytelling with his family, friends and colleagues.

Family and friends are invited to Robert’s memorial on Saturday, June 11, 3 to 6 p.m., in the John Dewey Lounge (Old Mill Building, 94 University Place, Burlington). Donations may be made in honor of Robert to the Michael J. Fox Foundation for Parkinson’s Research (michaeljfox.org/donate).