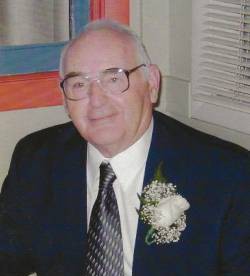 Robert A. Cioffi, 89, of St. Albans, Vt., passed away peacefully on July 22, 2020, at his home in St. Albans with his loving wife, Nancy, holding his hand. Bob was born in St. Albans on February 24,1931, the fifth child of George A. and Rose (Maffeo) Cioffi. He lived his entire life in St. Albans, the community he loved and where he worked hard to make a lasting and positive impact.

Bob, fondly referred to as Papa, enjoyed life to the fullest, always having fun along the way. He was an incredible and generous person with a great sense of humor and a positive outlook on life; he was a true role model to so many. Bob was fiercely loyal and dedicated to his wife, children, grandchildren, extended family, friends and to the Peoples Trust Company, “the Bank with a Heart” which he loved and where he served as a director for 30 years.

Bob was someone you could count on in good times or bad to help in any and every way possible. He was known for getting things done, and he couldn’t be bothered with minuscule details and mundane obstacles. Bob was a straight shooter and likable, both personally and professionally. Never boastful, always humble and always willing to share the wealth of knowledge he earned over his lifetime of experiences. He was generous to the core to those in need, never expecting or wanting anything in return. He took great satisfaction in seeking to make people's lives better and happier in his family, community, state, country and world.

Bob graduated from St. Mary’s High School in 1949. He joined the Army National Guard in 1949 and served in the Korean War as a sergeant. Stationed in Germany, he was an Army cook feeding hundreds of soldiers and honing his skills as a great cook who shared recipes and culinary secrets with his family throughout life. During his military service, he enjoyed traveling throughout Germany and Europe, with the highlight of returning to his father’s homeland of Italy. Along the way Bob made lasting friendships and gathered stories he’d share for years to come.

He returned to St. Albans, trying his hand at a couple of jobs with HP Hood Inc. and Sealtest Ice Cream, soon deciding that they weren't a right fit, as he was born an entrepreneur. Following in his father’s footsteps, he became a barber, completing Massachusetts School of Barbering in Boston and then working a short time in Wellesley. He again returned to St. Albans and joined his father’s barber business. He purchased the business and operated it for another 15 successful years.

Entrepreneurship called again, and he ventured into real estate in the St. Albans area, becoming the owner/broker of Robert Cioffi Real Estate, through which he built hundreds of homes, developed many residential settlements, renovated many commercial buildings and owned a multitude of rental properties. In fact, there aren’t too many places in St. Albans where Bob’s imprint hasn’t been left.

Bob married “the love of his life,” Nancy Wry, on April 19, 1954. Together they raised their four children, Frank Cioffi, Rob Cioffi, Susan Cioffi Boulerice and Carol Cioffi Spillane. Bob and Nan shared a life like no other. Everyone admired their love and commitment to each other over their 66 years of marriage. Bob and Nan’s home was always welcoming and full of family and friends enjoying good company, good food, great stories, jokes and lots of cheer. They enjoyed each other immensely and supported each other's passions and hobbies.

Bob had a passion for antique cars, owning a 1936 Buick, a 1948 Buick, Packards, Hudsons, a 1964 T-Bird, Corvettes, roadsters, Mercedes and MGs. He never got too attached to a car or a piece of real estate, as Bob loved making a deal and was a great negotiator. Bob and Nan traveled annually to many antique car shows, including ones in Hershey, Pa.; Lake Placid, N.Y.; Littleton, N.H.; Stowe, Manchester; and so many others. He always coordinated car shows with some retail adventures for Nan. They made many friends along their travels, whether it was at a car show or while snowbirding to their home in New Smyrna Beach, Fla. They enjoyed their second home for over 20 years, reconnecting with family from afar, making more friends and, of course, hosting their children and grandchildren for visits to Florida creating more wonderful memories.

Bob loved playing golf in Vermont and New Smyrna. He was always up for “international rules,” as he called them, where creative scoring was allowed. Bob also could be found doing other favorite things, like watching his favorite baseball team, the Yankees; watching Netflix; reading; bidding on eBay; working at his warehouse on his cars; riding around with his yellow Lab, Zoe; and, of course, spending time with his children, grandchildren and great-grandchildren. Bob embraced all the new technology, enjoying the internet, mobile phones, tablets, online banking, bill pay, Netflix and eBay. From time to time, one could expect to receive a “Bob Support” call, and when things went awry he’d close with, “Well, thanks for nothing!”

Bob loved dogs, especially Labs. He had many granddogs who loved him and would vie for his attention or to be his favorite. Bob and Nan donated land and water/sewer infrastructure to the Hard'ack Recreation Area. Part of the land is now home to a great dog park.

Bob was known for giving everyone a nickname, always with a sense of humor. Many of the grandchildren had “kins” or “alini” added to their names. Family and friends were of the utmost importance to Bob and Nan. They enjoyed a lifetime of dear friends, including the families of Larry and Peggy Larrow, Paul and Alicia Fredette, Larry and Lorraine Handy, John and Teresa Manahan, Robert “Shorty” and Rena Goulette, Richard and Claire Manahan, Frank and Rosemary Spendley, and Frank and Dottie Dowling. It didn’t matter what walk of life you came from, he always had time to share a little wisdom or a joke or two.

Bob’s family thanks Dr. Stewart Manchester and office staff, the St. Albans Dialysis Center, Franklin County Home Health and Home Instead Caregivers for their support and kindness over the past few months and weeks.

A Mass celebrating his life will be held at Saint Michael’s Chapel on Monday, August 3, 2020, at 11 a.m., with burial services at 2 p.m. in the Holy Cross Cemetery in St. Albans.

Please note that to comply with the State of Vermont’s COVID-19 safety requirements, social distancing and face masks will be required for all attending any of the services.

In lieu of flowers, donations can be made to the Holy Cross Cemetery, c/o Denise Messier, 68 Smith St., St. Albans, VT 05478 for the maintenance and beautification of the cemetery in honor of Bob Cioffi.

The Cioffi family and community were so very fortunate and lucky to have this great man in our lives. We will greatly miss Papa, our superhero and one of Vermont’s finest. We will love you always and forever. Rest in peace, Papa. Ba pa pa!