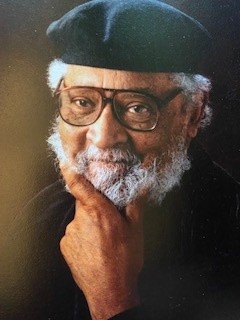 Richard was born in Bronx, N.Y., but grew up in Brooklyn, N.Y., during the Great Depression. He had three brothers and two sisters. He attended Catholic school, joined a monastery for two years and, after conscientiously resisting forced military service during the Korean War, became a lifelong pacifist. He met Frances McGonagle in the early 1950s, and they married in 1956. Their affection for the Catholic church dimmed when they had difficulty finding a priest in NYC willing to marry them, an interracial couple. Together, they raised six children.

Richard’s commitment to progressive causes began early in his adult life. From delivering free lunches through Friendship House in Harlem, to his role as union shop steward at a paper mill, to his position supporting academic and vocational training for youth at the Rodman Job Corp Center, Richard was a strong and steady advocate for others. In the early 1970s, there was a job opening in human resources at IBM in Essex Junction, which brought Richard and his family to Vermont.

Once retired, he spent decades of his life thereafter working tirelessly for peace and racial and economic justice. His community activism in Burlington subsequently led to serving on the boards of the Vermont Community Loan Fund, Peace & Justice Center, Champlain Housing Trust, Community Justice Center and CCTV (public access media). He was an active member of the First Unitarian Universalist Society of Burlington and held the distinction of being the first African American Burlington city councilor. As host of the Center for Media and Democracy Community Television broadcast "Near and Far," he interviewed people from all walks of life on his show. Archived episodes can be viewed at cctv.org/search/node/kemp.

Richard collected and donated used medical and science textbooks to a medical school in Cape Coast, Ghana, and low-cost medical supplies, crutches, etc. to a small hospital in Guatemala. He lived for many years as a resident of the Flynn Avenue Coop, the first of its kind, developed by Champlain Housing Trust. His advocacy, organizing and policy development efforts helped to further the cause of affordable housing. In 2010, CHT recognized Richard with the Carole Pack Volunteer of the Year Award. He was later selected to represent his neighbors, residents and the board at the United Nations World Habitat Day celebration in Angola, where CHT was presented with a World Habitat Award. Richard’s biography, Journey North, written by Katherine Nopper, was published in 2012. In 2019, CHT named a building Kemp House in honor of Richard. The Vermont Racial Justice Alliance plans to designate its new Cultural Empowerment Center in Burlington's Old North End as the Kemp Center in honor of his life’s work: his commitment to community and justice.

During his final days, he was warmly attended by the staff at Birchwood Terrace Healthcare and Bayada Hospice, along with family and friends. He is survived by a sister, Joyce, and a brother, William; six children, Christine, Carl, Gregory, Stephen, Martha and Kathleen; 14 grandchildren, Jaada, Wynston, Grace, Benjamin, Vanessa, Martha, Sam, Rosa, Sean, Ruby, Nathaniel, Blake, Evelyn and Andrew; and six great-grandchildren, Aminyah, Isaiah, Malachi, Liam, Stella and Vivian. Richard is also survived by his longtime companion, Laura Solomon. He leaves a legacy of service, loved ones and his beloved community in a better place.

In lieu of flowers, please consider making a generous donation in Richard’s memory to the First Unitarian Universalist Society of Burlington.

A celebration of life will be held in spring or summer 2022, date to be announced.