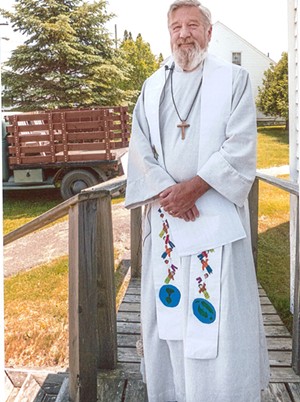 As anyone who had ever sat in a pew during one of his sermons, read his “Observer” columns in the Charlotte News, swapped songs with him around a campfire or taken a long drive to points unknown with him would tell you, Mark Bolles was a born storyteller. And because his life’s philosophy was to “Say yes and work out the details later,” many of his best stories were his own.

Mark lived a full and fascinating life. He was born to Henry and Doreen Bolles on August 21, 1951, in Providence, R.I., and his early years revolved around the Beneficent Congregational Church. Mark moved his young family to Bangor, Maine, in 1983 to study theology at Bangor Theological Seminary. In 1985, he was assigned to the Machiasport Congregational Church in Machiasport, Maine, as a student pastor, which began his lifelong love for Down East Maine. During this time, he also served the Marshfield Congregational Church in Marshfield, Maine, and earned a bachelor’s degree in education from the University of Maine at Machias.

Faith and community would provide Mark a road map for life, particularly in his career as a minister. But he relished detours, too. He left the church in 1999 and began a second career as an owner/operator of a tour bus company, Bristol Tours. While he loved his time in Vermont, Mark’s heart never really left Maine. Nor did his soul ever really leave the pulpit. He returned to both in 2015, accepting a call to the Whitneyville Congregational Church in Whitneyville, Maine, and moving to Machias with his wife, Susan.

Regardless of where he was, Mark was a devoted father, grandfather and husband. He was an asset to any community in which he found himself. While he sometimes took an unconventional approach to ministry, he was a brilliant and progressive preacher whose eloquent, clever sermons taught love, understanding and compassion — words he lived by to his dying day through actions large and small, whether comforting parishioners, offering an easy smile to his passengers, picking up hitchhikers or helping to rebuild Southern churches devastated by arson, among countless other examples. His passion for music, driving and Down East Maine were outstripped only by his love for his family and his desire to make the world a better place for those who needed it most.

Mark died surrounded by family at the Down East Community Hospital in Machias, Maine, on Sunday, August 12, following a lengthy illness with lung cancer. He is survived by his wife, Susan; his four children, Daniel, Tyler, Ariel and stepson Daniel Noel; Tyler’s wife, Kate Lasko, and their children, Arlo and Griffin Bolles; Ariel’s husband, Spencer Ham; his father, Henry; and his three brothers, Gary, Matt and Jay. He was predeceased by his first wife, Carolyn Wood.