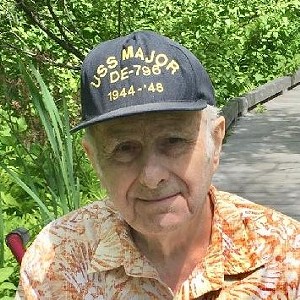 Raymond F. Keating passed from this Earth June 12, 2020. He lived a full and loving life of 97 years. Born in Meriden, Conn., on January 4, 1923, he left to join the U.S. Navy in 1942, shortly after the outbreak of World War II. His Navy adventures took him across the Atlantic and Pacific oceans, with memorable posts from Algeria and Morocco to the Philippine Islands; Casco Bay, Maine; Key West, Fla.; and finally to Tokyo Bay at the Japanese surrender, ending the conflict.

Ray returned home in 1946 and to his job at the Miller Johnson company, where he worked as a printer for 35 years. He met Helen Frances Bride, and they were married on May 1, 1948. Helen predeceased Ray on April 4, 2015, ending a loving and nourishing 67-year union. Their mutual Catholic faith was a consistent and lifelong feature of their relationship, first at St. Rose parish in Meriden and later at St. Augustine’s in Montpelier.

Ray and Helen retired to Montpelier in 1985. They loved their retirement years in Vermont, often volunteering at the Montpelier library, food pantry and Knights of Columbus bingo in Barre, where Ray had a longtime presence. Ray spent his last nine years at Heaton Woods in Montpelier under the loving care and dedication of their remarkable staff.

The family would especially like to express their heartfelt thanks to Darcy Warner, who was a caregiver to both Helen and Ray for many years, and to the kind staff at Heaton Woods.

In lieu of flowers, please consider remembering Ray with a donation to the Montpelier Food Pantry at 137 Main St., Montpelier, VT 05602, or to your local food shelf resource.