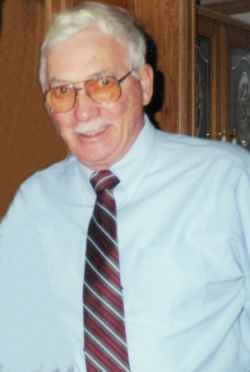 Ray attended schools in Swanton and Fairfield, then graduated from St. Mary’s High School. Shortly thereafter, he joined the U.S. Army and proudly served during World War II. On November 19, 1949, Ray married the love of his life, Janet L. Shepard who survives him.

Ray was employed for 42 years at the Missisquois Paper Mill in Sheldon Springs, which was previously owned by Standard Packaging, Saxon Industries and Boise Cascade. He worked in every department at the mill with the exception of two. For 36 years he worked in the shipping department and for the last 26 years was supervisor of shipping, receiving and raw stock. Ray retired December 31, 1985.

Among his many interests were working in his garden, fishing, hunting, fly tying, woodworking, and loading ammunition. Ray bowled on several leagues in St. Albans and won many trophies. He was also an enthusiastic Red Sox fan. Some of his greatest delights were attending the sporting events his grandchildren were playing in and walking most days with his loving wife, Janet. Ray also enjoyed playing cribbage with the gang at Hawks Nest.

Ray is survived by his wife of 66 years, Janet, his three sons, Scott L. Babbie and wife, Debra of Georgia, Steven M. Babbie of St. Albans and Richard A. Babbie of Sheldon Springs. He also leaves two special grandchildren who meant the world to him and was the proud “Grampa” of Melissa Babbie Walker, DVM of Seattle, WA and Curtis Babbie of So. Burlington. Ray had a wealth of friends and was loyal to all. He will be remembered for being a devoted and loving husband, father and grandfather who will be dearly missed.

In addition to his parents, Ray was predeceased by an infant daughter at birth, his brother Donald Babbie and his wife, Janet of Indian Orchard, MA and his sister, Dorothy Thibault of Boston, MA.

Visiting hours and funeral services will be held Thursday morning, February 11, 2016, in the Heald Funeral Home, 87 South Main Street, St. Albans from 9:30am to 11:00am, immediately followed by a funeral service with Father Maurice J. Roy, officiating. Interment with Military Honors will be at Mount Calvary Cemetery this spring.

Messages of condolence may be shared with the Babbie Family at www.healdfuneralhome.com