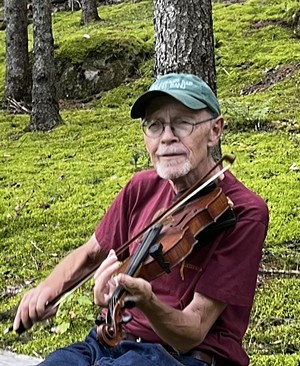 Peter Jeffrey Sutherland, lifelong Vermonter and world citizen, passed away on November 30 at the age of 71. Born May 13, 1951, in Burlington, Vt., to Mary Lou and Bob Sutherland, he grew up in Shelburne, Vt., and attended Champlain Valley Union High School and Castleton State College.

As a descendent of minstrels, he had a knack for music and art from as far back as anyone can remember. He lived his creativity and crafted a life and career sharing his music, poetry, art and storytelling.

One of his earliest outlets was writing and starring in home movies. While Pete went on to work with numerous performance groups here and abroad, his original endeavors involved recruiting family and neighbors to participate in his various project ideas.

His mom was the initial musical inspiration, playing and writing musicals at the piano, the instrument that Pete first learned. He was quick to develop the ability to play by ear, picking out melodies and composing his own. In high school, he played trombone in the marching band alongside his brother Chris. At Castleton, he began his lifelong love affair with folk and traditional music. It was during that time that he learned fiddle, banjo and guitar and formed his first gigging bands. While he was indeed adept at many instruments, he always washed dishes like a man just learning to play drums.

Pete was a student of Vermont history, and some of those stories found their way into his impressive body of songs and poetry. Always curious and well-read, Pete was an early adopter of health trends that would later become popular. His favorite foods were the ones he picked himself. He was a lifelong forager of mushrooms — and other wild edibles — that he would find on his frequent and beloved hikes.

Deeply committed to preserving traditions and discovering new musical pathways, he taught, mentored and inspired people of all ages. Pete leaves behind a rich legacy that can be found on the many albums he recorded, produced and played on; in his many projects, including those with the Vermont Folklife Center; and in the hearts and memories of those he touched.

He lived with cancer for over a decade, while continuing to follow his heart and creative muse. And when his body finally gave out, he chose Vermont’s Medical Aid In Dying Act, to go on his terms. Pete spent his time on Earth doing what he loved, and his was a life well lived.

Pete is survived by his son, Calum; his brother Michael; brother Davis and partner, Marie; and all their families. He was predeceased by his brother Chris.

A Full Circle Hoedown is being planned for his birthday in the Spring.