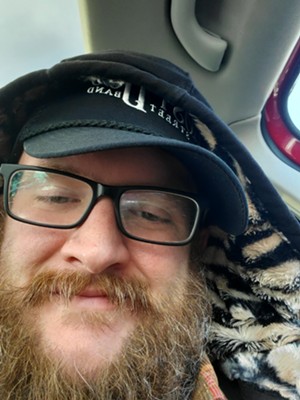 Patrick Tyler Metro of Westbrook, Maine, died in Portland, Maine, on November 23, 2022, of a brain hemorrhage. He was the beloved son of William and Sally (Stockwell) Metro.

Patrick was born in Burlington, Vt., on October 25, 1985, and grew up in Williston. He attended Champlain Valley Union High School in Hinesburg and graduated from Castleton University in Castleton, Vt. At the time of his death, he was working as a community outreach worker for Mercy Hospital in Portland. He was a certified peer counselor.

Pat was loved by family, friends and clients alike. For several years, he struggled with drug addiction, but he was finally able to get clean and sober at Hazelden Betty Ford Center in Minnesota in 2015. From there, he moved to Portland and became a peer counselor, working on the streets and in hospitals with the homeless, mentally ill, and addicted population. He was loved and respected by all who worked with him and who received his care. He was especially cherished by his partner, Kelsey, and his best friend and business partner, Lester Gilkey. He was an avid reader and video gamer. In typical Pat fashion, he continued to give after his death, donating both kidneys and his liver to save three lives.

Pat was predeceased by his grandparents, John and Kathleen Metro. He is survived by his parents; the love of his life, Kelsey Burrell; and his brother, Hazen, and his fiancé, Katelyn McKenzie. He leaves three sets of aunts and uncles, five cousins and more friends than we can count.

A gathering of friends and family to remember this extraordinary life will be held at the Hilton Garden Inn at 145 Jetport Boulevard, Portland, Maine, on December 11 at 12 noon. Anyone wishing to further Pat's mission can make a donation in his name to Spectrum Youth and Family Services of Burlington, Vt., at spectrumvt.org; Operation Hope in Maine at portlandrecovery.org; or Milestone Recovery Center in Portland at milestone-recovery.org.