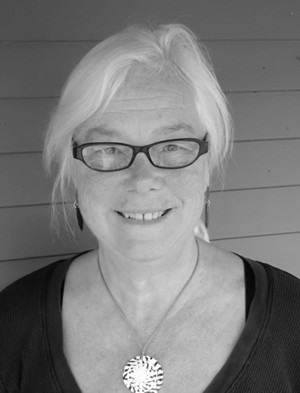 Pamela “Mela” Ann Brady died peacefully on June 19, holding the hand of her daughter, Vanessa, with a touch of tequila on her lips and a Tibetan prayer guiding her on her final journey.

Born on February 26, 1948, to Gene Brady and Kathryn Keasling in Washington, D.C., Mela grew up in Minneapolis and graduated from West High School and the University of Minnesota. When her mother passed away before fulfilling her own dreams, Mela committed herself to living a life filled with deep and abiding friendships, far-flung adventures, and transformational healing. Her fierce soul and generous heart made her a complex and contradictory woman, who was also a passionate, loyal friend, touching the lives of many across the country and around the globe.

Mela arrived in Vermont in 1977 to attend the School for International Training in Brattleboro, where she earned her master's degree in International Administration, after interning for CARE in Tunisia. She soon realized, however, that her true calling was in the healing arts. She went on to graduate from the New England School of Acupuncture and opened her own practice in Montpelier, where she moved in 1984 with her then-husband Peter Lind, and their baby daughter, Vanessa. She received advanced clinical training in Hangzhou, China, and soon added Qi Gong and then Sound Healing to her array of healing talents.

Mela used her gift for healing to serve people in Vermont and internationally. At home, she treated veterans for PTSD and helped people with addiction at several clinical settings, including the Waterbury Women’s prison. She combined her passion for travel with her professional skills, training midwives in the mountains of Tibet, helping earthquake victims in Honduras and rejuvenating depleted emergency workers following the tsunami in Indonesia.

Locally, she was a practitioner in several group practices, including Collaborative Healthworks, White Peony and Breathing Light, and she was an acupuncturist at Gifford Hospital for many years. She continued in solo practice up until her “retirement” the week before she passed. Though she could present a tough, and even ferocious, face to the world, her soft, intuitive nature came through in her practice, and many of the clients who knew and relied on this side of Mela became close friends over the years.

In 1989, Mela fell for the dashing, rock-solid Kevin McGinley. Together they built a welcoming paradise, “Lupine Castle,” on their property in Moretown, where they hosted friends from far and wide. A trip to Mela and Kevin’s often included a skinny-dip in the pond, a round of bucket golf and a cocktail or a toke in the hot tub under the stars. She was the consummate party host, organizing the annual rollicking Pisces Party with three other Pisces couples.

Mela was diagnosed with metastatic thyroid cancer in 2016. With Kevin by her side, she used her remarkable will to stretch her time to six more fully-lived years, hiking, biking, kayaking, xc-skiing and playing tennis and bridge. Play was essential, and a beautiful day required attention and action. She was a persistent motivator, getting her friends out to enjoy all that Vermont has to offer. In her last month, Mela made a final trip to Portland, Ore., to visit her daughter and beloved granddaughter, Sidney.

Mela was laid to rest in a green burial ceremony on the hilltop overlooking her property. Friends gathered to wrap her in a flower-covered shroud, tell stories of their time with her and send her on her final journey.

The original print version of this article was headlined "Pamela Brady, 1948-2022"