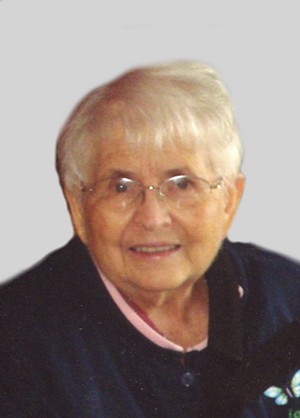 Born in Saint Albans on February 20, 1927, she was the daughter of the late John Samuel and Ina Julia (Luce) Hoy. She graduated from Bellows Free Academy-Saint Albans and on April 18, 1953, was married to Gordon Dean “Mac” MacGregor who predeceased her on December 17, 2009.

For many years Joyce was an active member of the Order of the Eastern Star beginning at the Weldon Chapter #79 in Saint Albans and continuing at Columbia Chapter #76 of Alburgh where she served as longtime treasurer and Chittenden Chapter #59 of Milton. From 2001 – 2004 Joyce served as Grand Representative of Quebec in Vermont.

She enjoyed and was excellent at playing golf and in earlier years was the Ladies Champion of the Alburgh Country Club. She and Mac especially enjoyed parties and spending time with their friends.

Besides her husband Mac of 56 years, Joyce was predeceased by a son, Ross H. MacGregor on August 25, 2008 and a brother, E. Leslie Hoy.

A Funeral Service will be held Friday February 20, 2015, at 1 p.m. from The Kidder Memorial Home, 89 Grand Avenue, Swanton. The Reverend John H.D. Lucy will officiate. Interment will take place in the Spring at The Old Stone Church Memorial Garden in Isle La Motte.

Friends may call at the funeral home on Friday from 11:30 a.m. until the hour of the service

Gifts in Joyce’s memory may be made to the charity of your choice.