Mother, homemaker, nurturer, educator and friend would light up the room everywhere she went 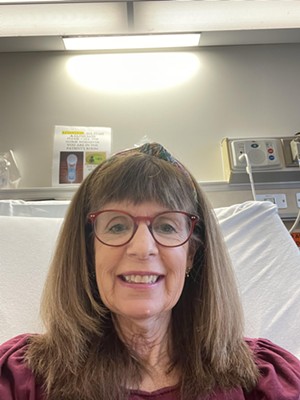 Mary Susan “Sue” Voigt passed away peacefully at her home on July 12, 2022, after living graciously and courageously with multiple myeloma for approximately 11 and a half years and finally succumbing to the brain disease PML.

Sue was always very vibrant, strong, upbeat and independent. She was determined that her illness would not define her; she would define how she lived with her illness. She was determined to live her life to the fullest, all while driving herself to chemo two days a week, three weeks on and one week off for seven and a half years. She got up each morning, put on her makeup, did her hair, dressed herself elegantly and drove herself to the hospital. If anyone asked why she was so well dressed for chemo, she said it was her job, and then she would do a little jig while singing a few bars of “Staying Alive” by the Bee Gees.

Sue was born on June 1, 1951, in Brooklyn, N.Y., the daughter of William and Lorraine Daley Beake. Sue was a graduate of Kinnelon High School, class of 1969, and briefly attended Trinity College of Vermont before leaving to marry the love of her life, Dennis Voigt, on December 20, 1970, in Burlington, Vt., and to pursue her passion and primary vocation as mother, homemaker, nurturer, educator and friend to everyone she met.

Sue always said she was a doer, not a sitter. And that she was. In addition to raising eight children including one grandson, she found time to have a daycare in her home for children of friends and neighbors. She was an avid La Leche League leader. She sold Tupperware to supplement the family income when Dennis was founding his accounting practice and became one of the top managers for Tupperware. Sue was highly intelligent and a true intellectual, which was clearly evident as she homeschooled four of their seven children. Sue was, in every sense of the word, a true partner in the development and growth of the family business. She was a true confidante and sounding board in virtually every decision related to the business. Dennis always called her the “chairman of the board.”

Sue did not seek the limelight, but the limelight often found her, as with the time that she spontaneously asked Dennis to drop her off at the Burlington airport for a breastfeeding awareness sit-in, after a breastfeeding mother was asked to leave a plane. Sue ended up on CNN holding up a sign that said, “Don’t be a Pervert.” And after participating in a study at Dana Farber in Boston, she was asked to be a spokesperson to promote CAR-T cell treatment shortly after the treatment was finally approved by the FDA. While she was unsure whether to participate, she felt honored and fortunate to be in the original study, which allowed her to be off chemo and mostly cancer-free for close to four years. So she agreed, in the hopes that her experience might help others. She was featured in a blog piece as well as a YouTube video describing her experience on the Dana Farber website; she was interviewed on ABC-TV Boston and WCAX-TV in Burlington; and she was featured in a segment on the TV show “The Doctors.” By all accounts, her participation did help, as she was told by prospective patients and the doctors at the University of Vermont Medical Center and Dana Farber.

Sue’s emotional intelligence was off the charts. She truly loved people. She loved to talk to people. It energized her. She adored everyone, and everyone adored her. Everyone said she would light up the room everywhere she went. She was no-judgmental, she was nurturing, and she encouraged and expected the best from everyone she met. In truth, everyone she met is a better person for having known Sue. We all are.

Sue was also a very private and modest person. For this reason, she has asked that we not have a public ceremony to honor her. She gave the gift of her life to all of us and expected nothing in return, other than her expectation that we will be the best person that we can be. The best way that we can honor her is to hold her in our hearts and minds forever and to live each day to try to be that best person that she saw in each and every one of us.

There will be a private family service in the future, as circumstances and COVID-19 allow. For those who wish, Sue has asked that any memorial contributions be made in support of the treatment and research of multiple myeloma to the Multiple Myeloma Research Foundation and/or in support of PML treatment and research to the Foundation for the National Institutes of Health.

Arrangements are in the care of the Cremation Society of Chittenden County, a division of the Ready Family. To send your condolences, share your stories and honor Sue, please visit cremationsocietycc.com.