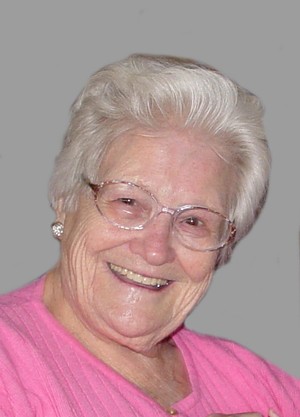 Born in Sheldon, Vermont on September 18, 1921, she was the daughter of the late Richard A. and Norma (Merrick) Cook. She attended Sheldon schools as well as the former Highgate High School. On September 21, 1949, she was married to Gordon Beyor, Sr., who predeceased her on September 9, 2005.

In addition to her responsibilities as a wife and mother, Mary also worked at Thermal Wire in South Hero, Triplex in Saint Albans and Softlite in Swanton. She was a lifelong parishioner of Saint Louis Roman Catholic Church and will always be remembered as a master at all kinds of crafts.

Mrs. Beyor leaves her five children, Kenneth R. Cook and his wife Donna of Enosburgh, Gordon L. Beyor Jr., and his wife Pauline of Alburgh, Sandra Daniel and husband Edward of Swanton, Avery G. Beyor and wife Connie of Highgate Center and Arvis H. Beyor and his wife Helen of Swanton; one sister, Tony Estus of Westford; 13 grandchildren; 19 great grandchildren and many nieces and nephews.

Mary’s family would like to extend their deepest appreciation to the nurses and staff of Our Lady of the Meadows and Franklin County Rehab for all of their professional care and kindness to her.

The Liturgy of Christian Burial will be celebrated Thursday September 11, 2014, at 10 a.m. from Saint Louis Roman Catholic Church, 186 Lamkin Street, Highgate Center. Father Luke P. Austin will be the celebrant and homilist. Interment will follow at the Beyor family lot in Saint Louis Cemetery.

Friends may call at The Kidder Memorial Home, 89 Grand Avenue, Swanton on Wednesday from 7 to 9 p.m. Father Austin will conduct a Vigil Service at 8:45 p.m. and will remain available after for private confessions.

For those who wish gifts in Mary’s memory may be made to the Alzheimer’s Association, Vermont Chapter, P.O. Box 1139, Montpelier 05601