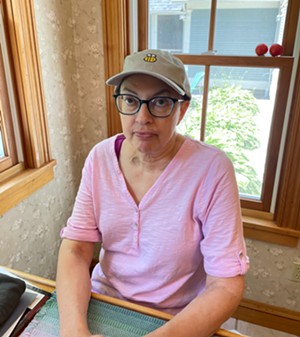 Mary (Conroy) Hall passed away at her home in Fairfax, Vt., due to complications from leiomyosarcoma on November 14, 2022.

Mary was born on July 8, 1961, in Brattleboro, Vt. Her younger years were spent in various Vermont towns until she moved to Engelwood, N.J., in 1970. After graduating from high school, Mary completed her undergraduate degree in economics from Rutgers University. She followed this with a graduate degree in international affairs from Columbia University.

After a brief career in banking and nonprofit organizations in New York City, Mary moved to Austin, Texas, in 1990. She would go on to earn an MBA and JD from the University of Texas at Austin. Mary was admitted to the bar in Texas and Vermont. While in Austin, Mary focused her law practice on family law.

Mary moved back to Vermont with her husband, Steve, in 2017.

Mary had a wide variety of jobs over the years, but nothing was more important to her than her daughter, Emily. Mary’s graduate work at Columbia took her to Europe, Asia and Africa. Through her extensive travels abroad with Emily, Mary instilled in her a love for culture and languages. They also shared a love for thrift stores and the New York Times crossword.

In addition to Emily, Mary is survived by her husband, Steve; mother, Joy, and father, James; sisters Jennifer, Paula, Katy and Victoria; stepchildren Melissa and Carrie; and Carrie’s son, Caleb.

The family would like to extend a heartfelt thanks to Dr. Hibba Rehman (University of Vermont Medical Center oncologist) and the staff at Bayada Hospice. In Mary’s memory, please consider making a donation to either Mercy Connections in Burlington, Vt., or to Casa Marianella in Austin, Texas. Both organizations meant a lot to Mary.

The family will have a gathering at their home on Sunday, November 20, 11 a.m. to 4 p.m., to celebrate Mary’s life. Anyone with a connection to Mary is invited to stop by, share a story and meet family. A burial will occur at a later date in Brattleboro, Vt.