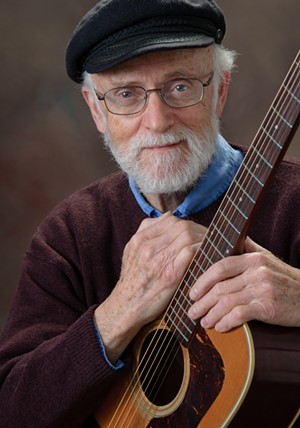 Marty Morrissey, one of Vermont's best-known folk musicians, died peacefully from metastatic melanoma in the early morning hours of March 30, 2021, accompanied by a roaring northwest wind and with a nearly full spring moon lighting up the sky. He leaves behind hundreds of heartbroken friends, bandmates and fans whose lives have been enriched by knowing this kind and amazing renaissance man.

Martin John Morrissey III was born in May 1938 in Essex, Mass., a small town on Cape Ann that Marty insisted was the place where fried clams were invented (at Woodmans of Essex, to be exact). His father was an Irish tenor, and his mother and aunt both played the piano. His aunt's wild rendition of "Kitten on the Keys" made a lasting impression on him, and Marty remembered "singing and dancing on tabletops" as a young boy. He was, as they say, "a born performer."

Marty began visiting Vermont as a teenager when he got hooked on downhill skiing. He decided to try to get a job in Vermont, learned about typesetting and printing during a stint in the U.S. Navy and, after graduating from Rensselaer Polytechnic Institute, landed a job as a printer at George Little Press in Burlington. He stayed until 1992, when the company was sold. Meanwhile, his future career as a professional musician began to take shape in the early 1980s.

During the 1960s, Marty's musical taste ran toward country music and pop vocalists like Rosemary Clooney. He did attend the Newport Folk Festival a few times but managed to miss (maybe on purpose) Bob Dylan's first game-changing electric performance at Newport 1965. It was the middle of the 1970s before Marty started listening regularly to the Clancy Brothers and to folk singers like Louis Killen and Ewan MacColl. At about the same time, he discovered the Burlington Coffeehouse and spent many happy evenings playing music and organizing jam sessions at the Woolen Mill in Winooski and the Dockside Tavern in Burlington. In 1981, Marty formed the Highland Weavers with Tim Whiteford and Matt Buckley. This popular Celtic music trio performed around the Northeast for more than 35 years. Marty sang and played guitar and concertina with the band, and he also provided all kinds of percussion for the jazzy Tin Pan Valentinos, Burlington's Celtic pub punks Bootless and Unhorsed, and many other musical combos. Marty released two solo recordings, three with the Highland Weavers, one with the folk trio Swing and Tears, and two collections of Vermont songs with his longtime musical partner Robert Resnik. In his mid-seventies, Marty returned to his country music roots and began playing with a band called Classic Country. He was also a founding member of a Johnny Cash tribute band that has played at, among other venues, every prison in Vermont. Until the COVID-19 limitations began last year, Marty also provided regular performances at a retirement home in St. Albans.

And that's not all. In his "spare time," Marty grew impressive vegetable gardens; hiked the entire Long Trail in sections; taught tai chi at the Charlotte Senior Center; put up gallons of homemade tomato sauce every year; visited Ireland at least 10 times for pleasure and/or to do genealogical research; found the time to read and discuss new titles he received each month from the History Book Club; was an active member of the Chittenden County Stamp Club; and still enjoyed hiking, golf and skiing well into his eighties. Marty could also bake a mean and magnificent key lime pie.

Marty was predeceased by his parents, Martin J. Morrissey II and Mildred Gallagher Morrissey, and is survived by Joan Rising, the love of his life, and also by his dear friend Harriet Patrick. We would also like to give special thanks to the staff at the Respite House in Colchester for their kindness and expertise.