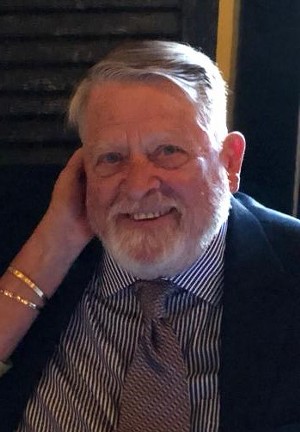 Marshall MacDonald True slipped gently from this life on the morning of February 28, 2021. He was born June 28, 1938, in Portland, Maine, to Marshall Leland True and Marion (Young) True. Marshall grew up and attended elementary and high school in Cape Elizabeth, Maine, a childhood that he described as perfect.

He graduated from Bates College in 1960 and found his way to the University of Virginia, where he received his master's degree and then his doctorate. After a year of teaching at UVA on Wallops Island, Va., he took the position of professor of history at the University of Vermont in 1966, where he remained until his retirement in 2000. Teaching was Marshall’s passion. He often described his job as “getting paid to read books and talk about them, which I would happily do for free.” He looked forward to the beginning of each semester with enthusiasm — the new and returning students, the new syllabus, and the new texts all brought him joy.

While teaching gave him satisfaction, the family he created brought him happiness and comfort. With his first wife, Judith Yarnall, he welcomed Julia True (Jeroen Kok) and Katherine True into the world — and completely lost his heart and equilibrium. In time, and after his marriage to Charon (Goderwis) True, his family was complete with the arrival of twin sons, Adam True and Steven True (Joy Watson).

In 1971, we bought a house in East Fairfield that we fondly nicknamed the Big Wooden Tent. Having quickly learned that the plumbing, wiring and other repairs the old house required were best left to professionals, we turned instead to its rolling hillsides. Over the next 50 years, we created, imagined, abandoned and reimagined our gardens to our hearts’ content. Marshall loved working the ground and was particularly fond of his flowers — peonies, clematis, hollyhocks. He found inspiration in the indefatigable asparagus, reawakening every spring without fail. When age and illness put him on the sidelines, Marshall delighted in sitting on the back deck in the evenings, taking in the scents and views of the gardens, full of suggestions about what we should do next year.

In 1995, after what Marshall described as a terribly long wait, we began welcoming another generation into our lives. Over the following 10 years, we were abundantly blessed with nine grandchildren: Lara Kok, Nico Lepeska-True, Milo Kok, Julian Lepeska-True, Lilia True, Emma True, Alexander True, Tess Lepeska-True and Sarah True. The last two Marshall affectionately dubbed “Tessara” because they arrived nearly at once. He loved being a father, but he really blossomed as a grandfather. He held, cuddled, soothed and was charmed by each grandchild. He particularly loved sitting with a grandchild or two in his lap and a book that demanded many silly voices.

After Marshall’s retirement, we traveled to visit family and also to satisfy curiosity about places we had read about. The week before Marshall died, he reminded me that our passports expired during the pandemic, and he asked me to start the process of renewing them. We had begun planning our first post-pandemic trip to the Scots Highlands, a place Marshall had always wanted to see. Ever hopeful. Ever adventurous.

As soon as travel becomes safe, hopefully by summer, we will gather in East Fairfield at the Meeting House on the Green (a former village church that he loved) and celebrate the 82 years of Marshall True’s life. A further notice of the details will appear in this publication. Marshall is survived by his brother Michael True (Edie Williams) and sister Marilyn True, both of Auburn, Maine, as well as his wife Charon, his four children and his nine grandchildren.

In the place of flowers, please consider a donation to the Bent Northrop Memorial Library, 164 Park St., Fairfield, VT 05455.