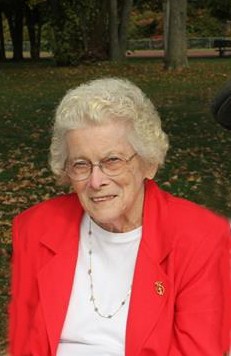 Mrs. Marie Mae (Bechard) Lamothe of Swanton, Vermont, went to be with her Lord, Sunday, December 21, 2014 at the University of Vermont Medical Center in Burlington.

Marie was born May 11, 1922 in St. Armand, Quebec the daughter of Leonard and Bertha (Vayette) Bechard. She was married in St. Albans on July 5, 1941 to Fred P. Lamothe who predeceased her on October 13, 2005. Marie was Fred’s partner and the love of his life. She was a devoted member and communicant of the Church of the Nativity in Swanton where she was one of the first appointed Eucharistic Ministers and belonged to the Ladies of St. Anne. She was also an active member of her local Home Dem group.

Marie is survived by the five sons she and Fred raised; Norman and is wife Monique of Swanton, Raymond and friend Sandra Murdaugh of Manning S. Carolina, Armand and Wife Karen Lamothe of Swanton, Edmund and friend Julie Bushey of Swanton and Edward and wife Tammy Lamothe of Swanton, 14 grandchildren and 19 great-grandchildren. She is also survived by her siblings; Theresa Gervais, Ferdinand Vosburg, Lorraine Laba and Estelle Favero, her sisters-in-law; Theresa Lamothe, Rita Lamothe and Rose Lamothe and many nieces and nephews.

In addition to her husband, Fred and her parents, she was predeceased by her brothers; John, Germaine and Father Bernard Bechard SSE and her sister, Cecile Leduc. Marie was also predeceased by brothers-in-law; Leo, Robert, Andrew, Jean, Clement, Henry and Paul Lamothe, Norman Leduc, Ray Gervais, Charles Laba and Donald Vosburg and her sisters-in-law; Rita Lamothe, Gertrude Gregoire and Rita Perron.

The Liturgy of Christian Burial will celebrated Tuesday, December 30, 2014 at 11 AM from the Church of the Nativity of the Blessed Virgin Mary, 65 Canada St., Swanton. Fr. Luke P. Austin will be the principle celebrant and Fr. Marcel R. Rainville, SSE will be the homilist. The Rite of Committal and Interment will follow in the Lamothe family lot in St. Mary’s Cemetery, Swanton.

Friends may call at the Kidder Memorial Home, 89 Grand Ave., Swanton on Monday, December 29, 2014 from 4-7 PM. Fr. Austin will lead a vigil service at 6:45 PM and will remain available after the service for private confessions.