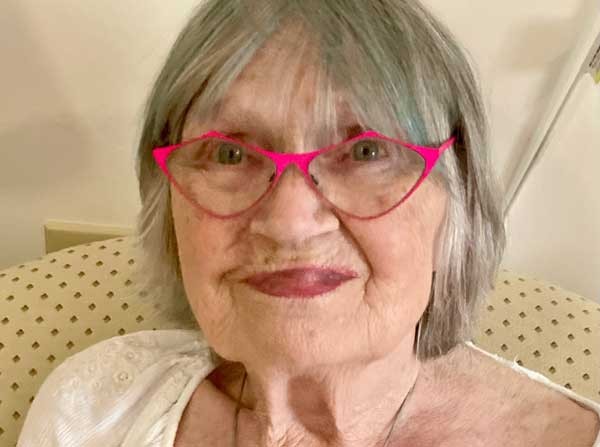 Margot Hobbs (née Margot Elisabeth Renata Serowy), a painter who lived for the past 40 years in northern Vermont, died on Thursday, November 11, 2021, at age 84. The cause of death was unspecified. A resident of St. Albans, Cambridge, Essex Junction and Burlington through the years, Margot was well known among the local artist community.

Margot was born on September 18, 1937, in East Prussia, a daughter of Gertrude and Ernst Serowy. She met with great misfortune at the close of World War II, when, at age 7, she and her family were forced to flee their hometown of Angerburg as the Russian army invaded East Prussia.

Margot, her mother and her younger brother lived for more than two years as displaced refugees, traveling hundreds of miles by horse-drawn wagon while bearing witness to the horrors and humiliations of being caught between Nazi and Russian fire.

Through a series of seemingly miraculous events, the family eventually made their way through the Iron Curtain into West Germany, where the family was reunited and life gradually improved.

Margot was a star athlete as a teenager and reported winning national competitions in track and field. A strikingly beautiful young woman, she married at age 18, and she and her husband Otto emigrated to the U.S. in 1958, initially settling (as many Germans did) in the Bronx, N.Y. As a couple, they worked as building superintendents while Otto completed occupational and academic schooling. Margot, with her adventurous and bohemian spirit, was undaunted by boiler room and trash bin responsibilities, wearing pearls while fending off cockroaches.

A close friend suspected that Margot had artistic talent and gave her a set of paints and brushes, igniting a lifelong spark. Margot passionately threw herself into painting, studying for years under several New York artists including the expressionist Maxim Bugzester (a student of Braque), and shortly thereafter began to exhibit her work, with her first show at Panoras Gallery on West 56th Street.

Margot continued painting and exhibiting throughout her years as a mother and homemaker. The family eventually made its way to Vermont, where Margot became involved with many organizations, including the Bryan Memorial Gallery, the Chaffee Art Center and the Vermont Studio Organization. Her work continued to be featured in solo and group exhibitions throughout northern Vermont and New York City.

Margot worked in an expressionist style, with oil, watercolor and woodcut as her preferred media. Her subjects range from striking and colorful Vermont landscapes to dark depictions of the ancient Greek story of Medea and Goethe’s Faust.

But Margot is most well known for a collection of about 10 large canvases and woodcuts telling her story of a child refugee’s experience of war. “Refugees” is a graphic, disturbing series — scenes from hell on Earth from a 7-year-old’s perspective. “Faces no longer truly human, numbed, twisted, lost, grab the viewer’s eyes and, far more than a photo, make you see what war does to people caught in the middle. Who are they? Women, children, and the elderly — not soldiers. They are uprooted, pushed along in the wave of battle and move without plan or thought.” (Robert C. Philbrick, Jeffersonville, Vt.)

Margot’s direct and personal manner of speaking about her life experiences helped her make friends everywhere she went. Margot had a deep interior life, practiced meditation, and adored the music of Schubert, Leonard Cohen and Johnny Cash.

Margot is survived by two daughters, Rochel and Verena; her son, Aaron; her brother Jürgen Serowy; her beloved grandchildren, Moses and Sid; and her cat, Govinda.

A memorial service will be announced at the discretion of the family. Contributions in Margot’s memory may be made to the International Fellowship of Christians and Jews.

Online condolences may be shared by visiting awrichfuneralhomes.com//book-of-memories/4784865/hobbs-margot/index.php.