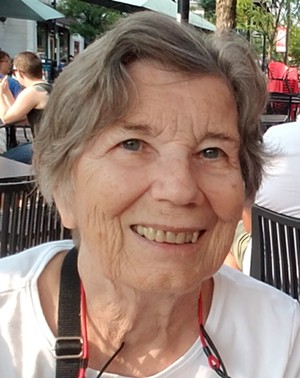 Luisa Aurelia Roth Chernyshov died peacefully at the Arbors in Shelburne, Vt. on May 12, 2021. Luisa was born August 1, 1935, in Uzhhorod, Ukraine. She lived in Spisska Bela, Slovakia, until 1944, when World War II forced the family to make the 200-mile journey west on foot to Austria, dodging American bombers and sleeping in burned-out buildings before making it across the border and watching the gate of what would become the “iron curtain” close behind them. After spending four years in a displaced person’s camp near Salzburg, where Luisa gained her love of forests and nature while on long walks with her father, she and her parents, Elisabeth “Ella” Tokay Roth and Karl Otto Roth, and younger sister, Katarina Roth (Barach), were finally given refugee status to immigrate to the United States in November 1949. They were sponsored and lovingly welcomed by Ella’s sister Louisa Tokay Kean, who had immigrated to the U.S. 20 years before, and her husband, Lawrence Kean, in Winchester, Mass., outside of Boston.

Luisa graduated from Woburn High school in 1955, attended the University of Massachusetts Amherst for two years (where she developed a lifelong passion for the card game bridge) and graduated from Chandler Business school in 1958. While working a summer job for Transitron Corporation, she met a brash young engineer and fellow immigrant who became the love of her life, Vladimir Nikodimovich Chernyshov. They married in 1958 and settled in Danvers, Mass. Luisa, Vladimir and their two children then moved to Poughkeepsie, N.Y., in 1963, where Vladimir started his career with IBM. In 1970, the family, now with two more children, moved for the last time to Essex Junction, Vt., and wholeheartedly embraced the Green Mountain State and all it had to offer. In fact, a glimpse of Camel’s Hump would invariably cause Luisa to happily exclaim, ”There’s my mountain!”

Luisa, Vladimir and the children all learned to ski and regularly hiked and camped all over New England and the country, including one memorable six-week cross-country trip in 1973. Luisa loved showing the delights of Vermont to her friends and family from other states, and to the many visitors from Europe whom they hosted over the years. She and Vladimir also went to visit relatives in Slovenia and Czechoslovakia, and they vacationed in Bermuda, Germany and Paris.

After having one more child in 1973 and with the other children getting older, Luisa focused for many years on their activities, and then increasingly on her own. She was always an active and competitive bridge player. She volunteered at the Fletcher Allen Hospital and for Meals on Wheels, and she was a member of the 1st Congregational Church in Essex Junction.

After Vladimir’s retirement, they increased their traveling. She made yearly visits to her children and grandchildren in the American West, and she enjoyed vacations in Utah, Idaho, Wyoming and Washington State. She also regularly traveled to spend a few weeks in Florida and made trips overseas to Italy, Portugal, Spain, Iceland and, most recently, a boat trip with good friends on the Danube River, where she was once again able to visit the cities of Vienna, Bratislava and Prague that she last saw as a child before and during the war.

Luisa was known among her children’s friends for her kindness and welcoming, always inviting stray children to stay for dinner and keeping the pantry stocked with treats for the five rounds of hungry teenagers hanging out in the house for nearly 20 years. She was almost always happy and curious about all sorts of things, frequenting museums and historic sites wherever she went. She also loved babies and particularly enjoyed children older than 6, “when I can teach them things.” She hosted grandchildren and grand-nieces and -nephews for weeks at a stretch for many summers, shuttling them to Audubon camps and making the annual summer visit to Boston to walk her beloved “Freedom Trail” with some 10-year-old in tow. Luisa’s happiest moments were listening to Tom Jones sing — once in-person in Las Vegas — dancing with Vladimir at various events, reading and flower gardening, and joining her adult kids for a beer and a hot dog at Switchback Brewery. After a bit of Champagne at wedding parties, she would take to the dance floor and dance like no one was watching.

Luisa was predeceased by her husband, her parents, her sister and one great-grandchild. She is survived by her brother Philip and wife Linda Roth of Danville, N.H., and by her five children, Stephanie and husband Gary Taylor of Ferrisburgh, Vt.; Dimitri Chernyshov and partner Kari McDuffie of Charleston, S.C.; Katarina and husband Robert Merkel of Cle Elum, Wash.; Sophia Mesler of San Rafael, Calif., and Alexis and wife Heather Chernyshov of Burlington, Vt. She is also survived by grandchildren Joshua Chernyshov; Emily Taylor Savio (Jake); Katherine Taylor Scherer (Walter); Maxwell Taylor (Molly); Drew, Eric and Karl Merkel; and Niko and Ella Chernyshov; as well as by niece Emma Roth Dunn (Bill); nephews Jeffrey Barach and James Roth (Sierra); three great-grandchildren, Dee, Etta and Finley; and numerous great- and step-nieces and -nephews.

A memorial service for Luisa will be held in early August.