Poet, spoken word artist and Celtic harper is remembered by loved ones around the globe 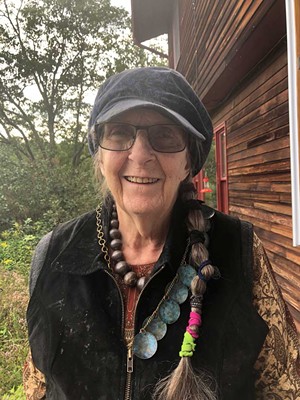 Leanne Ponder died peacefully at home in East Montpelier, Vt., on Christmas Eve at 1:45 p.m., after a long illness. She was surrounded by family and friends and received loving care.

She tackled her difficult final years with the same strength, discipline, skill and attention to essentials as she brought to being a poet, spoken word artist, Celtic harper, friend and wife.

Her poetry was published both in small journals and in large-circulation magazines as diverse as Esquire and Cricket. A few years ago, she brought out a book of her poems, Tonight Not Even My Skin. She helped many hundreds of children write strong poetry as an artist-in-residence in schools across Vermont. She spent many years performing around the state in the character of a 1850s backwoods peddler, first through the Shelburne Museum, then through the Vermont Humanities Council.

She had a 30-year loving and productive artistic partnership with her husband, Tim Jennings; their duo storytelling performances with Celtic music were widely recognized as being among the best of their kind; their spoken word albums received multiple awards. A self-taught Irish harper, she released two instrumental music albums, The Water Kelpie and Sheefra, that were acquired by the Irish Traditional Music Archive in Dublin.

She is survived by her husband, a brother, a sister-in-law and brother-in-law, and many nieces and nephews scattered around the globe. There will be a very small memorial service at home and a joyful celebration of life in mid-July 2022.