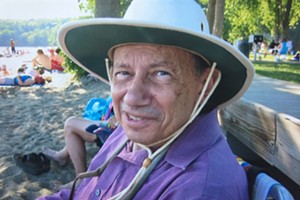 Kenneth Irwin Gross, professor emeritus at the University of Vermont and founder of the nationally recognized Vermont Mathematics Initiative, died on Sunday, September 10. Ken was a highly respected research mathematician and an inspirational and innovative teacher who later became equally well recognized as a champion for mathematics education.

During his career, he held faculty and visiting appointments in eight states, Taiwan and Australia and served as program director at the National Science Foundation. He was recruited to UVM in 1987, where he chaired the Department of Mathematics and Statistics from 1988 to 1992. Under his leadership, the department expanded its mission in research, undergraduate teaching and outreach to all corners of Vermont.

Ken cofounded several organizations with the goal of enhancing the teaching of mathematics in Vermont, including the Vermont State Mathematics Coalition and the Vermont Mathematics, Science and Technology Summer Institute for talented Vermont high school students, designated in 2017 as the Kenneth I. Gross/Tony Trono Governor’s Institute in the Mathematical Sciences. He founded the Vermont Mathematics Initiative to improve mathematical knowledge of elementary- and middle-school teachers and enhance their ability to inculcate in their students a love and enjoyment of mathematics. To date, the VMI has trained more than 500 Vermont teachers to become mathematics teacher-leaders in their schools and districts. The VMI model has been adopted in eight states and Australia.

Ken also received many prestigious awards throughout his career, spanning teaching, scholarship and service, and was an inaugural fellow of the American Mathematical Society.

Ken spent the final weeks of his life at the McClure-Miller VNA Respite House, where he was surrounded by the love and comfort of his family and friends, as well as by the tender care and kindness of the staff and volunteers, where the twinkle in his eyes and great smile were returned. If desired, contributions in Ken’s name may be made to the McClure-Miller VNA Respite House, 3113 Roosevelt Hwy., Colchester, VT 05446.

A celebration of Ken’s life will be held on Sunday, October 15, at the UVM Alumni House. All who wish will have an opportunity to share memories with those in attendance.