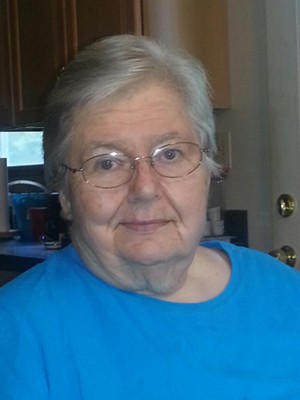 Katharine Anne (Franklin) Koniuto, 73, of Underhill died on Tuesday, September 29, 2015 at the University of Vermont Medical Center in Burlington. She was born in Binghamton, NY on June 28, 1942, daughter of Henry S. and Grace (Heller) Franklin. Katharine was married in Binghamton to Roger Francis Koniuto on June 29, 1963, and enjoyed a fiftieth anniversary celebration with friends and family in 2013.

Kathy devoted her life to her family, her faith, and her community. When her children were young, she volunteered as a Girl Scout leader and regional cookie coordinator, and served for many years on the Underhill ID Elementary and Mt. Mansfield Union School Boards, including as chairperson. She gave inner city children the opportunity to experience the Vermont summers her children enjoyed through her participation and leadership with the Fresh Air Fund. Kathy also volunteered at the Underhill ID school as an aide, amusing the children with silent clown “Zero the Hero.”

She brought her faith to the St. Thomas parish community in Underhill, where she served as Sacristan, participated on the parish council and numerous committees, introduced adult religious education programs, and taught youth catechism. As Eucharistic Minister, she visited senior citizens in their homes, offering Communion and sharing conversation.

Kathy donated nearly 100 gallons of blood to the Red Cross. She delighted in animals and wildlife (“birds and critters”), a passion she shared with her daughter Laura. She was an avid and successful photographer, and an enthusiastic seamstress and knitter. She was also a dedicated advocate for the musical arts, first as a supporter of Underhill’s Hanaford’s Fife and Drum Corps, and more recently, championing Calliope, Boston’s collaborative choral orchestral ensemble. A Calliope Memorial Chair will be named in her honor in 2016.

Katharine is survived by her husband Roger and five children, Julia, Lisa, Maria, Robert, and Peter, and nine grandchildren Cody, Nathaniel, Carter, Katelyn, Daniel, Morgan, Mehgan, Clive, and Iris, and her brother Dennis. She was predeceased by her daughter Laura, parents Henry and Grace Franklin, and her sister Mary Sevcik.

A Mass of Christian Burial will be celebrated on Friday, October 2, 2015 at 11:00 am at St. Thomas Roman Catholic Church in Underhill Center with burial to follow at St. Thomas Cemetery. In lieu of flowers, memorial contributions may be made to choral/orchestral ensemble Calliope (www.calliopemusic.org) or to one’s charity of choice. Visiting hours will be held on Thursday from 4 to 7 pm at the Ready Funeral Home Mountain View Chapel, 68 Pinecrest Drive, Essex Jct. To send online condolences, please visit www.readyfuneral.com