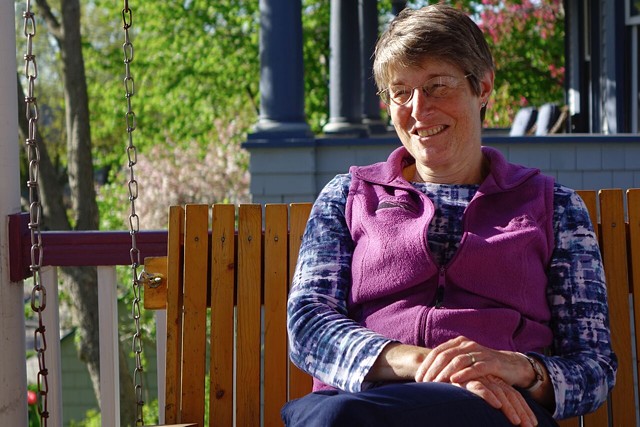 Karen Freudenberger died unexpectedly but peacefully of heart failure on December 1, 2016. A graduate of Oberlin High School, Ohio in 1973, Karen was from early on a community and environmental activist. As a high school student, she organized the first Earth Day in Oberlin, and after graduating from Bryn Mawr College in 1978 she worked for Congressman Don Pease in his Washington D.C. office. She spent a year in Kenya as a Rotary Fellow. Afterwards, she attended the Woodrow Wilson School at Princeton University where she earned a Master’s degree in Public Policy. Karen served in the Peace Corps in Senegal for two and a half years as a specialist in community development, and during that time in her remote village, met her future husband, Mark.

Working together as a devoted team in the arena of international community development, she and Mark spent the first years of their married life in Senegal while Mark completed his UCLA doctoral degree field research and dissertation write-up. Afterwards, they worked together at the Land Tenure Center of the University of Wisconsin, and then in Washington D.C. where Mark served with the World Wildlife Fund for a few years before moving to Madagascar with their six- and one-year old daughters. Throughout this time, Karen traveled extensively with her infant daughters throughout West Africa and Madagascar training colleagues in innovative participatory research methods. Looking back at their careers and family life, Karen and Mark viewed the 11 years in Madagascar as the pinnacle of their professional and family lives together.

Whenever Karen saw a problem, she set about finding a solution. In Senegal, she sought out appropriate technologies to lighten the heavy workload of rural women. After a cyclone in Madagascar decimated a colonial era railway serving hundreds of thousands of people, she built a strong coalition of government, local communities, and international donors to resurrect the railroad while introducing innovative environmental engineering techniques to stabilize hillsides against future severe weather incidents. For her pioneering work in using vetiver grass to protect the highly-eroded hillsides along the railway, she received a prestigious award from the King of Thailand. When politics undermined the rehabilitation of the railway, she transferred her energy to saving and rebuilding a historic section of her city Fianarantsoa. That project continues to thrive to this day. Karen received the Madagascar National Legion of Honor in recognition of her many contributions.

In 2009, Karen and her family moved to Burlington, Vermont. Soon after arriving, Karen began working with New American communities with the intent of imparting her visions and skill sets to social justice. When Karen discovered that New Americans were annually importing over 3,000 pounds of frozen goat meat from Australia and New Zealand, she reasoned that in a state where local foods are valued so highly, there ought to be a way to raise meat goats and to harvest the goats in humane and culturally appropriate ways. Through the generosity of the Vermont Land Trust (VLT), Karen conceived of what has become the thriving Pine Island Community Farm in Colchester, Vermont that produces goats, chickens, honey, and vegetables for the Burlington-area refugee and New American communities. The farm has become a cultural gathering place. While Karen’s vision, perseverance and skills are irreplaceable, the farm will continue to thrive. The Association of Africans Living in Vermont (AALV), as manager of Pine Island Community Farm, and the VLT as the farm owner, are committed to preserving and prolonging Karen’s legacy.

Karen succinctly described her lifetime devotion to improving people’s lives in a speech she gave in Burlington just days before her death at the Vermont World Affairs Council: “The idea, so very simple in theory, but so infinitely complex in practice is that people working together, wherever and whoever they are, can make good things happen. Fixing up trains, building composting latrine toilets, setting up goat farms…it’s really all the same. People need to decide that they want to do something, join forces, vanquish the naysayers, and get to work.”

She is survived by her daughters Maia (24) and Annika (19), and her husband Mark, along with many family members across the world. There will be a celebration of Karen’s life on Saturday, January 7, 2017 from 2:00 pm to 5:00 pm at St. Joseph’s School, 20 Allen Street in Burlington. Walking and carpooling is encouraged. In lieu of flowers, contributions to the Karen Freudenberger Fund for Pine Island Farm can be made by sending a check payable to the Vermont Land Trust with “Karen’s Fund” noted on the memo line. Send to: Vermont Land Trust, 8 Bailey Avenue, Montpelier, VT 05602, or visit this website: www.vlt.org/karen.