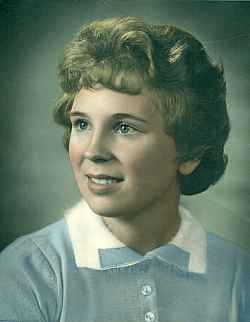 June Elizabeth Leach lost her courageous battle with Parkinson’s disease on July 26, 2016, at St. Albans Health and Rehab. She was born in Georgia, Vermont on May 29, 1944, the daughter of the late Eldon A. Reynolds and Elizabeth (Dewart) Reynolds.

June worked at being the best mom she could be to her children. We are blessed to have had such a wonderful woman to love, cherish, and care for us as she did. Mom enjoyed trips to Maine with her family and Lake Willoughby. The many shopping trips with her daughter and to concerts also. June loved to go to Red Hats with her classmates from high school. She had a lot of fun with them. She enjoyed dinners at her daughter’s house in Highgate and never missed out on being there for her kids or husband.

She worked for the State of Vermont Probation and Parole, Dept of Corrections. Later on she worked for Bathfitters and Westinghouse. In later years, she found a nice job at the Franklin County Museum as a clerk, which was a favorite job for her and her last until she retired.

June is also survived by her brothers and sisters-in-law, Allen and Cheryl Leach of Enosburg Falls, special cousins, Peggy Strait of St. Albans and Chet Strait of Virginias, as well as her beloved dog, Buffy, that was by her side when she didn’t feel well.

There will be no funeral services per June’s request. There will be a burial at Torrey Cemetery at the convenience of her family.

Gifts in memory of June may be made to the Franklin County Animal Rescue, 30 Sunset Meadows, St. Albans, Vermont 05478.

Assisting June’s family is the Heald Funeral Home, where messages of condolence are welcome at www.healdfuneralhome.com.