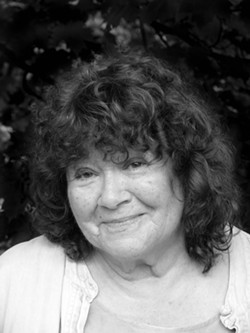 Judith Greta Kane “fell off the twig” as she would say, on May 22, a few weeks after learning of her cancer. Jude was born in London in 1930, and at age nine was evacuated to the countryside, along with her siblings, during the worst of the bombings of WWII. She married landscape architect Thomas Kane, of Worcester, MA, in 1953, having met him at a Lyon’s Corner House in London. She told her children that things would’ve turned out very differently if she had not happened to have a very boring book to read while waiting at the café for a friend. Tom and Judith’s honeymoon trip was a unique year-long journey from London to Sydney, Australia, driving a farm tractor and trailer, through Europe, the Middle East, India and all countries in between. She moved the family from Westchester, NY to East Hardwick, VT in 1970, on the spur of the moment, and was always happy to call Vermont home. She loved the old Vermont, and b ack-woods characters, and in the past few years wrote a series of amusing stories of her early years here.

Jude was full of life, and intensely curious and passionate about history, politics, art, spirituality and many other subjects. She was a voracious reader, a painter and art teacher, a creative quilter and seamstress, a prolific writer of poetry and stories and an amateur actress. Jude was an outgoing person who always found fascination in the lives of the people she met. She gave famous parties, many of which revolved around witty skits and songs, most of which she wrote. “If you’re going to throw a party” she always advised, “go all the way, and give people a real party! This past winter she was working on a series of wooden assemblages, designed to provide housing for bees, and to adorn a new bee garden being created in the gardens.

Her love of plants, especially herbs, inspired her daughter Rachel to start Perennial Pleasures Nursery at the family house in 1981. She ran a popular bed and breakfast for many years, and also the Brick House Gift Shop, first in Hardwick, later moving it to the nursery. She was most famous, perhaps, for opening an English-style tea room at the nursery in the late 80s, which continues today. Jude was always a generous hostess.

She became an American citizen in the 1990s but never gave up her British accent nor appreciation of a good “cuppa”. Jude was predeceased by her husband Tom who died in 1995. She is survived by her brother Christopher of London, her daughter Rachel and son Patrick of East Hardwick, VT, and sons Barnabas of Denver, CO, Tim of Cincinnati, OH and Chris of Concord, NH, as well as grandchildren Benjamin, Ceilidh, Nicholas, Hilary, Cody, Stewart, Carter and Finn. In lieu of flowers, donations to the following charities would be appreciated: Save the Elephants (savetheelephants.org), Save the Bees (xerces.org), and The Art House (vermontarthouse.org).

There will be a memorial gathering in celebration of Jude’s life at Perennial Pleasures Nursery, East Hardwick, VT on Saturday, July 22 from 1pm to 5 pm with a service at 2:30 pm, to which friends and well-wishers are welcome. Cards to the family may be sent to PO Box 128, East Hardwick, VT 05836. Rachel Kane may be contacted at rmkane7@gmail.com.