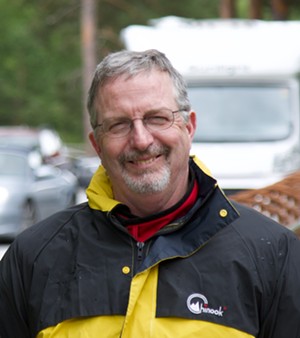 Joseph Cafferky, 64, of South Burlington, passed away on July 14, 2022, doing what he loved: motorcycling.

Joe grew up in Warwick, R.I., where, after high school, he worked at General Dynamics. After moving to Vermont in 1988, he worked for many years at Blodgett and TSA. He spent the last couple of years before retiring doing what was perhaps the perfect job for him — getting paid to talk to people — as a tourist information agent for the Lake Champlain Chamber of Commerce.

He was proud of his Irish heritage, even slipping into a hearty brogue now and then, and recently was granted Irish citizenship through his grandfather, Patrick, who emigrated from County Roscommon as a young man. Joe and Pam had visited his grandfather’s hometown in 2019 and were planning to return there in the future.

He was immensely proud of his sons, Patrick and Kevin, not only for becoming the strong, decent men they have grown into, thanks to the model he set, but also for their accomplishments and his hope for their futures. He was eagerly anticipating dancing at Kevin’s upcoming wedding and celebrating Pat’s completion of graduate school.

As much as he loved motorcycling, his true passions were his family and friends. He loved nothing better than to sit and talk, whether reminiscing about good times in the past or discussing plans for the future. He was also a good listener and frequently reminded us that “Everyone wants to be heard.” He gave solid, thoughtful advice, whether or not he was asked for it. His dry humor could lighten even the darkest mood, even if the jokes sometimes fell a bit flat or were more than a little inappropriate. But, most importantly, he always made sure the people close to him knew that he loved them and was proud of them. He was the best husband, father, brother, son and friend we had, and he will be forever loved and missed.

Joe is survived by his wife, Pamela Hunt; his sons, Kevin and Patrick; his soon-to-be daughter-in-law, Margaret Hayes; his father, James Cafferky, of Warwick, R.I.; his brothers, James (Joanne) of Coventry, R.I., Michael (Romeo) of Clinton, Mass., and Bryan (Paul) of Franklin, Mass.; his sister, Mary (Ray) of Murrells Inlet, S.C.; his former wife, Martha Wales, of Essex; his father-in-law, Charles Hunt, of Hilton Head, S.C.; numerous aunts, uncles, nieces and nephews; and his canine girls, Gabby and Maple. He was predeceased by his mother, Virginia; and his mother-in-law, Marlene Hunt.

Join Joe’s family at a celebration of his life at All Souls Interfaith Gathering, 291 Bostwick Farm Rd., Shelburne, VT on Friday, July 29, at 4 p.m. In lieu of flowers, reconnect with an old friend or strike up a conversation with a stranger. Joe would have liked that.