"Free-spirited soul" was passionate about nature and outdoor adventures 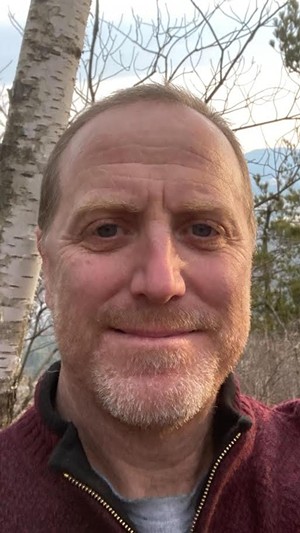 John Sebastian Rinelli passed away unexpectedly on August 31, 2022, at the age of 53. He was born in Wisconsin and moved with his family to several places in the country, eventually landing in Connecticut. It was there that he graduated from Danbury High School. After working as a freelance carpenter for several years and traveling the country, he chose nursing for his career. He graduated from the University of Vermont, and he enjoyed Burlington so much that he decided to live here.

John was a highly skilled and respected rehab nurse at Fanny Allen for 21 years. In 2001, he met his ex-wife, Petra, who was visiting from Germany, and they got married two years later. During their 10 years together, they raised two boys, Max and Nicolas. After their separation, they continued their care for their children with shared custody, and John stayed very involved in his sons’ lives.

John was an intelligent, adventurous, compassionate, creative and resourceful human being, and he liked to refer to himself as a “free-spirited soul." He was passionate about nature and the outdoors, and he loved traveling. Snowboarding was one of his biggest favorites that he started before it became popular. John was an avid hiker and liked camping, mountain biking, kayaking, skateboarding, skiing and taking walks with his dog, Honey.

Before John settled down, he crossed the country on a motorcycle for many months and had great experiences with people in many places. He was known for annual motorcycle pilgrimages to the New Orleans Jazz Festival, countless backcountry and snowboard adventures across the country, and regular excursions, like early morning fresh-powder runs at Jay before going to work. John had an encyclopedic knowledge of waterfalls and hiking trails in the Northeast.

John’s love and knowledge of bands and live music venues was equally extensive. He attended countless concerts and music festivals over his lifetime. Perhaps you noticed him doing his “Rinelli shuffle” late nights after he got off work at Nectars or Metronome. John enjoyed gardening and was an excellent cook, always shopping for special ingredients and experimenting with new recipes. Making intricate wire-wrapped jewelry was one of his skills and interests in his earlier years. John is passing down his passions for the outdoors, camping, snowboarding, skiing and skateboarding to his teenage sons, Max and Nicolas, whom he loved bringing on all sorts of adventures. Through them, John’s adventurous spirit and zest for outdoor experiences and excitement will continue to live on. John knew how to live life fully. He was an inspiration to many.

John leaves behind his sons, Max and Nicolas; his former wife, Petra; his brothers, David and Jay, and Jay’s partner, Christine; his nephews, Nathaniel and Liam; and his mother, Susan. John was predeceased by his father, Sebastian Brian Rinelli. John also leaves behind many relatives and great friends.

A celebration of his life will be held in the near future.