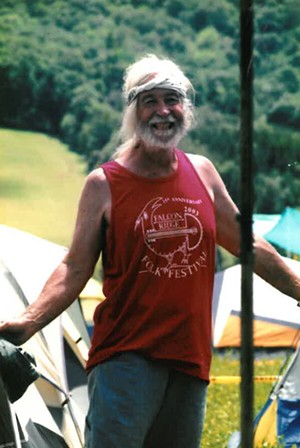 John “Ken” Lawless passed away on Friday, October 13, 2017, at the University of Vermont Medical Center. Ken was born August 28, 1939, in Saranac Lake, N.Y., and was the son of John and Marguerite Lawless.

Ken Lawless was a writer, educator, performer and activist who had lived in Burlington since 1999. A lifelong activist, Ken attended Martin Luther King Jr.’s “I have a dream” speech on his birthday in 1963, was a faculty leader of on-campus protest against Michigan State’s early participation in the Vietnam War, and, more recently, was an active member of the Wobblies and involved in protests against Vermont Yankee. He was frequently seen in the Vermont press and on YouTube performing his original compositions and speaking out.

A loving father and grandfather, Ken was also a prolific author of fiction, poetry, humor and essays. Published works included “Twenty Characters in Search of an Academic Novel” and “Ampersand & Question Mark,” published by Zetgeist Press in the 1960s and '70’s; mass-market humor including “Real Extra-Terrestrials Don’t Phone Home,” “Dissolving Rubik’s Cube” and the “Who’s the Next President?” series, published in the 1980s; and multiple essays in journals and magazines, including the Antioch Review and Adirondack Life. In his capacity as the director of the Center for Music, Drama and Art in Lake Placid, N.Y., Ken organized the arts programs surrounding the 1980 Olympics, earning an honorary Olympic medal, and staged numerous theatrical productions, including directing an authorized and critically acclaimed production of JP Donleavy’s A Fairytale of New York and serving as the director of the educational theater group the Prop Trunk Players. As an educator, he taught college English and history for many years at institutions including Michigan State, CUNY and SUNY; created an early AIDS education program and the Harvesting the Harvesters distance learning program to improve educational outcomes for the children of migrant workers through grants at SUNY Potsdam; and was instrumental in homeschooling two of his children. He graduated magna cum laude from the State University of New York, Albany, in 1961 and was MA/ABD as a Carnegie Mellon scholar at the University of Pittsburgh from 1961 to 1964.

Ken will be missed, as he was a friend to the many of us who knew him. He is survived by his daughter Mary and husband, Chris Hull; grandson Nicolas; wife, Nancy Ann; brother Jack; and many loving friends. He was predeceased by his son, Seumas Sebastion Lawless. There will be a celebration of Ken’s life held in the future.